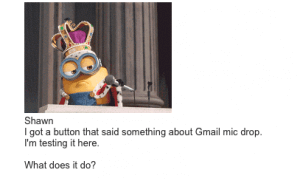 Yesterday, I noticed something unexpected in my Gmail. I was intending to send a work-related email. There was the usual blue “Send” button at the bottom of the email, and a bright orange “Send” button that had an image of a microphone on it. What the heck was that?

To test it out, I decided to send an email to my husband, Shawn. I told him I wanted to test out the Mic Drop Gmail thing so I could find out what it did. Seconds after sending him the email, he told me that it arrived with the short message I sent and with a GIF of a Minion that was dropping a microphone.

The “Mic Drop” is a visual way of saying “I have the last word”, or “I won the argument”. I was curious to see if Gmail would allow him to send me a response to that email. He sent the response, but it did not show up in my Gmail. After digging around, I found the email in my “Sent Mail”.

In short, the Mic Drop enabled a person to end an annoying email conversation and to avoid having to see whatever responses the other person decided to send. Brilliant! Shawn and I laughed at Gmail’s little joke, and went on with our day.

Well, it looks like we pranked ourselves this year. Due to a bug, the Mic Drop feature inadvertently caused more headaches than laughs. We’re truly sorry. The feature has been turned off. If you are still seeing it, please reload your Gmail page.

Google has been doing some major updating as of late to try and make it all work together. Gmail is one of those items that is getting a revamp. Today on the Official Gmail Blog, Product Manager Itamar Gilad announced the new features of this version to Gmail.

From the Gmail Blog: We get a lot of different types of email: messages from friends, social notifications, deals and offers, confirmations and receipts, and more. All of these emails can compete for our attention and make it harder to focus on the things we need to get done. Sometimes it feels like our inboxes are controlling us, rather than the other way around.

The new Gmail inbox will include tabs to organize different emails. Inbox groups (as Google calls it) will organize mail into categorized tabs. So spammy posts can go to an “Offers” tab and friends can be put into another tab.

The mobile version of Gmail will also have this option. You will need to download from Google Play or Apple iOS App Store to get these features.

If you don’t like the new inbox, simply switch it off and it goes away.

This feature is rolling out slowly. When you get the new feature, you will see a “Configure Inbox” option in the settings (the gear icon on the top-right).

Last week Google began rolling out its brand new Compose feature, a version that had been a part of Labs for testing over the past few months. Originally, it appeared that the roll out of that feature to all users was irrevocable, but now we have learned that is not actually the case….yet.

As it turns out, Google has built in a way to go back to the old compose feature and, no, this is not part of the company’s annual raft of April Fool’s jokes.

When you click the Compose button and receive the new pop-out box that it generates, simply move your mouse to the bottom right of the screen and click the down arrow that appears there. From here you will find an option to “Temporarily switch back to the old compose”. Its that simple. However, the resulting warning does let you know that this feature will be going away “soon”. This week Google began rolling out a new Compose interface for Gmail. If you have not yet received then you soon will — it is spreading to users gradually. The new look is based on a version that has been tested as a Labs feature for some time now, and Google spent that time looking for input from those brave souls who opted to test it out.

Now, according to product manager Phil Sharp, the company is “ready to introduce the new compose experience as the default for everyone. We’re looking forward to hearing what you think”.

Changes include, not only a completely new look, but also the ability to send files using Google Drive, pop-out replies and support for originally missing features like starring and labeling when composing and the Canned Responses lab.

You will not need to do anything to get all of this — it will come to you, even if you do not want it. The announcement was made by Google two days ago and it found its way  into my Gmail this morning. When it finds you it will pop up a box explaining how the features work. There is no option to go back.

Google may be the company we love to hate lately, but there is no denying that it dominates many markets, like search, advertising and mobile. The company also has one of the most popular web-based email services on the internet. Today it finally rolled out an anticipated update to its Gmail app for Android and it brings the features we had been promised.

The new app rolled quietly out to the Play store this morning and users should receive the update to their Android devices automatically, if they have that feature enabled. Otherwise you will need to manually install it.

The bigger question is, what do you get in this latest version? If you are fortunate enough to have a device running Jelly Bean (4.1 and up) then there is great new feature — the ability to reply, archive or delete from notifications, meaning there is no need to open the actual Gmail app.

For those running Android 4.0 (Ice Cream Sandwich) or newer, you will get faster search (including offline) and bug fixes. Those stuck on 2.2 and newer devices will get a new Labels API for 3rd-party app developers and some performance improvements.

Obviously all updates from 2.2 up are available to those running Jelly Bean, but that is sadly still a minority of Android customers.

A few days ago Android Police posted an exclusive video showing the next version of the Gmail app.  Version 4.2 includes several new features that users have wanted for some time now, like pinch to zoom in emails, swiping away emails to archive them, reporting emails as phishing scams and a lot more.  At the time, they also posted links to the download of the .APK file, but Google asked them to take the links down and the site complied.  The folks at XDA Developers also complied with the request but, as you probably know, things posted online never really go away.

If you  do some searching around you will see that the file is still available, but only a bit harder to find.  Hint: you can click here.  Before you get too excited though, there are a few things you should probably know.  Most importantly, your device needs to be rooted in order to install this update.  You will also need to have a phone or tablet running Android 4.0 or 4.1. and you will need follow several hacky steps to get it up and running.  You can find all of the steps detailed over at The Android Soul.

This has been a good week for Google app updates with, not only this new version of Gmail, but also a nice update to the Google Play Store (now at version 3.9.16).  The Play Store update, unlike the Gmail update, has already begun rolling out to users, but if you haven’t received it then you can also grab the .APK file, which Google is NOT asking to be taken down.  The new Gmail should begin rolling out very soon.

Google today announced better search integration for Gmail, their popular web-based email service.  The new and improved version will have a more thorough auto-complete feature thanks to better crawling of the messages in your email.  Better search sounds great, but is it really better or is it just a more complete privacy invasion?

While I don’t have any real problem with Google reading my email, they have been doing it all along anyway, this seems like something that privacy advocates, already leery of the Mountain View search company, will latch onto as more evidence against Google.  After all, the better auto-complete comes via better reading of your messages.  Google admits as much in their announcement – “Now when you type something into the Gmail search box, the autocomplete predictions will be tailored to the content in your email, so you can save time and get the information you want faster than ever before.”

The new feature will be rolling out over the next few days.  For now it’s only available for English users, but Google promises support for other languages will be coming over the next several months.  You can read their announcement over at the Gmail blog.  How do you feel about this improved email search?  Do you think it’s just a feature to make the service more useful or are you genuinely worried about your personal data?