The saga of the JEDI contract continues! In October of 2019, The Department of Defense chose Microsoft over Amazon for its “Joint Enterprise Defense Infrastructure” project. The contract could be worth as much as $10 billion over a decade.

In November of 2019, The Washington Post (which is owned by Jeff Bezos, the founder of Amazon), posted an article stating that Amazon would challenge the Pentagon’s decision on the JEDI project. Today, CNBC reported that Amazon Web Services, Amazon’s cloud computing arm, wants to depose President Donald Trump, Defense Secretary Mark Esper, and former Defense Secretary James Mattis over the JEDI contract that was awarded to Microsoft.

A spokesperson for Amazon Web Services told CNBC the following:

“President Trump has repeatedly demonstrated his willingness to use his position as President and Commander in Chief to interfere with government functions – including federal procurements – to advance his personal agenda. The preservation of public confidence in the nation’s procurement process requires discovery and supplementation of the administrative record, particularly in light of President Trump’s order to ‘screw Amazon.’ The question is whether the President of the United States should be allowed to use the budget of the DoD to pursue his own personal and political ends.”

Personally, I don’t think this statement, or the (now unsealed) court documents filed by Amazon, are going to make any difference. The Trump administration has a history of not releasing information that it doesn’t want to. I have no idea why Amazon believes that Trump said ‘screw Amazon’, but honestly, this President has said other crass things, so it wouldn’t surprise me if President Trump actually did say that. I also do not understand why one of the richest companies in the world is so worried about the JEDI contract. It is unimaginable that Amazon needs the money.

The Washington Post (which is owned by Jeff Bezos, who is also the founder of Amazon), posted an article stating that Amazon will challenge the Pentagon’s decision on the JEDI project. From the article:

“AWS is uniquely experienced and qualified to provide the critical technology the U.S. military needs, and remains committed to supporting the DoD’s modernization efforts,” Amazon spokesman Drew Herdener said in an emailed statement. “We also believe it is critical for our country that the government and its elected leaders administer procurements objectively and in a manner that is free from political influence. Numerous aspects of the JEDI evaluation process contained clear deficiencies, errors, and unmistakable bias – and it’s important that these matters be examined and rectified.”

Reuters reported that Amazon filed the notice that it will formerly protest the decision on JEDI. Reuters also reported that President Donald Trump has long criticized Amazon and its founder Jeff Bezos. CNBC reported that the decision about which company would get the JEDI contract was postponed until Secretary of Defense Mark Esper completed a series of thorough reviews of the technology.

Personally, I think this situation could potentially turn into a long series of court cases. In the meantime, it seems to me that the Department of Defense is not going to wait for the outcome, and will continue working with Microsoft.

The European Commission opened a formal antitrust investigation to assess whether Amazon’s use of sensitive data from independent retailers who sell on Amazon’s marketplace is in breach of EU competition rules.

Commissioner Margrethe Vestager, in charge of competition policy, said: “European consumers are increasingly shopping online. E-commerce has boosted retail competition and brought more choice and better prices. We need to ensure that large online platforms don’t eliminate these benefits through anti-competitive behavior. I have therefore decided to take a very close look at Amazon’s business practices and its dual role as marketplace and retailer, to assess its compliance with EU competition rules.”

The Commission will look into:

The Commission states that there is no legal deadline for bringing and antitrust investigation to an end, and that it has informed Amazon and the competition authorities of Member States that it has opened proceedings in this case.

The Verge reported that the antitrust announcement happened on the same day that Amazon announced changes to its third-party seller service agreement in response to a separate antitrust investigation by German regulators.

Pocket Casts is one of the most used apps on my OnePlus 3T, playing podcasts in the car and while out walking. It’s a great app, though I’m still in two minds about the new version 7.0. Why do app developers feel the need to alienate existing users with radical redesigns for no real benefit?

Regardless, one of the coolest features of Pocket Casts is that it keeps playback in sync across multiple devices. Say I listen to Geek News Central in my car and I get about half-way through the latest show. Once I’m home, maybe I want to use my tablet rather than my phone and Pocket Casts knows exactly where I got to in the GNC show. It picks up where I left off without missing a word. Very cool.

And even more cool is that Pocket Casts has an Alexa skill that plugs into the same ecosystem. Once setup on your Echo, it’s “Alexa, open Pocket Casts” and Alexa responds “Welcome to Pocket Casts. Would you like to keep playing Geek News Central?” I say, “Yes” and Alexa plays from wherever I was. Fantastic.
Alternatively, I could decline the initial offer and ask to play a different podcast from my library.

To enable Pocket Casts, and in particular, the cross-platform syncing, there are three things you need to do 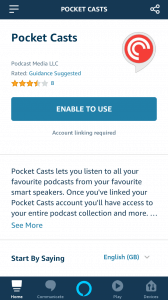 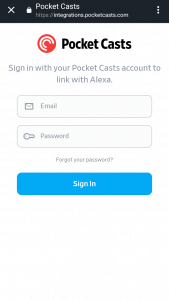 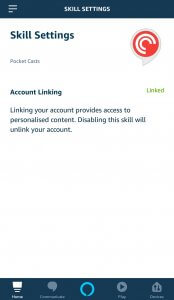 With the Alexa and Pocket Casts account now linked, you can listen to podcasts on all your devices without having to scrub backwards and forwards to find the right spot. Give it a try. 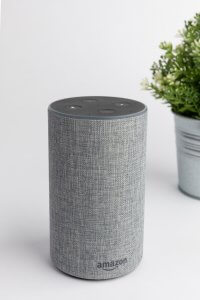 Good news for Alex and Google Home users in the UK. The government’s Cabinet Office and Government Digital Service have been working to feed the digital assistants with UK-specific information relating to government services. There are now over 12,000 pieces of information, including the minimum wage, applying for a passport and getting free childcare. Additional services will be added over time, such as how to renew car tax and how to get married.

The head of GOV.UK, Jennifer Allum, said, “We want to simplify people’s interactions with the government, making information clear and accessible to everyone.These results are promising because voice services can be a really convenient way to get information, particularly for people who find computers and phones hard to use.”

You can ask Alexa, “When is Brexit?” which she answers accurately, but sadly she doesn’t seem to know who my Member of Parliament is. Then again, Alexa only has useful information…

Amazon and Google announced that in the coming months, the two companies will launch the official YouTube app on Amazon Fire TV devices and Fire TV Edition smart TVs, as well as the Prime Video app for streaming to Chromecast and Chromecast built-in devices.

In addition, Prime Video will be broadly available across Android TV device partners, and the YouTube TV and YouTube Kids app will also come to Fire TV later this year.

Chromecast and Chromecast built-in users, along with Android TV users, will have easy access to the Prime Video catalog including the latest seasons of Amazon Originals like The Marvelous Mrs. Maisel, Hanna, Homecoming Beach, Catastrophe and The Grand Tour, along with Amazon Original movies like Donald Glover’s Guava Island, and Academy Award nominated films like The Big Sick and Cold War.

Engadget points out that this ends “a long contentious relationship between Amazon and Google.” According to Engadget, the addition of YouTube apps only applies to Fire TV devices.