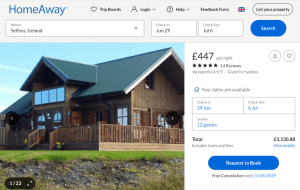 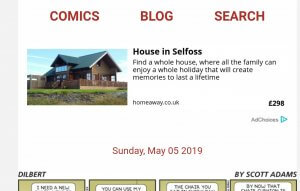 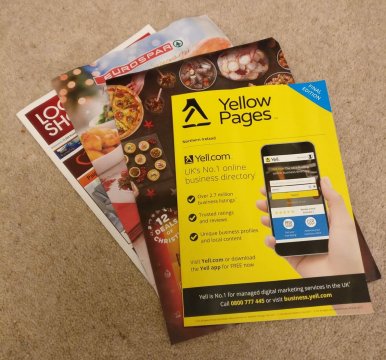 A Yellow Pages came through my letterbox the other day along with other festive promotions. That was the first clue – a Yellow Pages didn’t used to fit through the letterbox, being usually left on the doorstep for the homeowner to trip over. The next clue was the blue flash in the top right hand corner “Final Edition”. That’s right, the paper copy of the Yellow Pages is shortly to be no more.

It’s not exactly surprising. This copy was a svelte 200+ pages of sub-A4, not the 1,000 page brick of a book that defied judo champions. First published in 1966, the last of 104 final editions will drop onto doormats in January 2019. Along with everything else, finding businesses has gone on-line and there’s now yell.com for all your local business needs.

Yellow Pages was responsible for some iconic catchphrases and adverts. “Let your fingers do the walking” and Fly Fishing by JR Hartley entered the zeitgeist in 1983, decades before the web and memes. I’m sure there will be fond memories of Bike, French Polishers and Cleaners too.

Truly an end of an era.

(This article is about the British Yellow Pages) 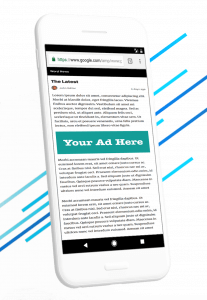 AMP (Accelerated Mobile Pages) is a technology from Google that makes your pages load faster in mobile browsers. AdPlugg can now be used to serve ads into your AMP formatted pages.

AdPlugg can schedule, rotate, and report on the ads that appear in your AMP pages. This might be useful for those who want to include ads on their website, and it could potentially get your website more traffic from mobile users.

The standard way to implement AMP is to have two page urls, one regular one and an AMP one. Mobile browsers are told to use the AMP version. Pages that adhere to AMP standard often load almost twice as fast as a regular web page. This is due to a simplified structure, improved cachability and the elimination (or deferment) of slow moving resources.

AdPlugg is now an official AMP extension and a provider of amp ads. AMP has also integrated with the AMP WordPress plugin from Automattic to make it easy to place ads into your WordPress powered AMP pages.

There is a helpful step-by-step list on the AMP website that walks you through how to make this work. It also has a brief description on how to add tags manually or programatically for people who are not using WordPress. Interestingly, AMP has a link you can click to see what the AMP version of their post about AdPlugg would look like on a mobile device.

One of the most common ways for websites to generate income is to post ads. Today, many people use ad blockers so they won’t be annoyed by all those ads. Flattr Plus provides a way for people to support their favorite websites and use an ad blocker at the same time.

Flattr Plus, which is currently in beta, was created by Flattr and Ad Block Plus. It is expected to launch at the end of this month. In short, Flattr Plus gives people an automated way to make micropayments that support the creators of the web content that the person engages with the most. You set a budget, and Flattr Plus’s algorithm automatically distributes the right amounts to the right sites.

According to E-Commerce Times, Adblock Plus and Flattr together get 10% of what is donated. It also reported that consumers need to provide a method of payment and specify how much they are willing to contribute to their favorite sites. A person can choose to make one-off donations or regular payments.

Flattr Plus solves the problems with existing micropayment solutions. In previous micropayment schemes, users had to manually fund single articles. The Flattr Plus algorithm automates that process.

Flattr Plus has a really cute video that explains why it is needed. 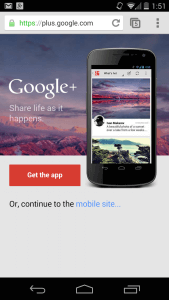 What do you do when you visit a website that allows you to view the content for a second or two and then covers the entire screen with an ad? If you are like me, you rush to close the browser. A (very narrowly focused) case study by Google reveals that people are not a fan of those types of ads.

Personally, I hate it when websites give me two seconds to look at the article I wanted to read, and then cover the entire screen with an ad. It’s a confusing situation to be in, for about a second or two, until I realize what happened.

Where did that article go? Oh, it’s been buried beneath a huge ad. The next thing I do is close the browser. It’s quicker than trying to figure out where to click on the ad to make it go away. I don’t want to waste time searching for an x to click when I could be visiting a different website that has the same information that I wanted to read about.

I don’t use my phone to surf the internet, but I’m certain that if I did, I’d be equally eager to evade those annoying “in your face” ads. And, I wouldn’t be alone. Google did a case study on their mobile ads for the Google+ app. They used interstitials that covered the screen in an effort to make people aware of their app. They had a feeling that they should remove the ad, but wanted to gather data about it before doing so. Here’s what they found:

9% of the visits to their interstitial page resulted in the “Get App” button being pressed. Some of those who clicked that button already had the app. Some of them never followed through and installed the app. I suspect that these clicks were from people who were just trying to get the ad out of their way.

69% of the visitors to their interstitial page abandoned the page. These people didn’t go to the app store, and they didn’t continue to use the Google+ mobile website. In other words, they were annoyed by the ad that blocked what they wanted to see, so they went somewhere else.

Google then chose to remove the interstitial ad, and replace it with a Smart App Banner. One result was that 1- day active users on their mobile website increased by 17%. They have since retired the annoying interstitial ad that was chasing users away from their website.

If there is a moral to the story, it is this: If you want people to visit your website – don’t cover the entire website with an ad seconds after a person decides to give your website a try.

Twitter has created some new tools that will make it easier for people to advertise on Twitter. A brand new homepage has been created for analytics.twitter.com and it has been given a new name – Account Home.

The Account Home service is accessible not only for brands that have Twitter accounts, but also for regular Twitter users. It gives users a glimpse into how much interaction their tweets received and provides a summary of account activity.

It notes how many times you have tweeted. It tells you how many people have seen your Tweets, how many have visited your profile, and how many have mentioned your @username. You can also see how many Twitter accounts have followed your account.You can find out what your top tweets were in a given month. Those tweets are the ones that got the most interactions.

What’s the point of having all this data? Twitter explains it this way on their small business blog:

Use this information to quickly share your best content with a wider audience, engage with your most influential followers, or as a starting point to do a deeper dive into your account performance.

I can see where this would be useful for people who have Twitter accounts that connect to a business. Find out who your biggest fans are, take a look at what they seem to like, give them more of that.

It might also help a person who is trying to promote their podcast, band, or book to get a tweet about it in front of more eyes. People could ask their “Top Follower” to retweet something for them. Or, they could start actively engaging with their “Top Follower” in the hopes that he or she might mention them to all their followers.

There is also an option to “sign up for Twitter Ads” in an effort to have a particular tweet to be seen by more people. This service, of course, is not free.