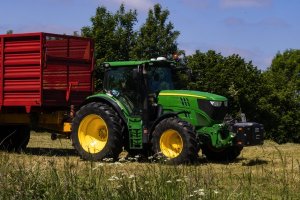 John Deere is rolling out self-driving tractors that can plow fields by themselves, and sprayers that distinguish weeds from crops. Deere, which helped make satellite-guided tractors ubiquitous in the U.S. Farm Belt over the past 20 years, is investing billions of dollars to develop smarter machines that the company said will make farming faster and more efficient than it ever could be with just farmers behind the wheel, The Wall Street Journal reported.

According to the Wall Street Journal, by the end of the decade, John May, Deere’s chief executive projects that 10% of Deere’s annual revenue will come from fees for using software.

The Wall Street Journal also reported that while farmers have said they are open to test-driving new technology, many are struggling with the cost of necessities including fertilizer and fuel, which have surged in price over the past year.

John Deere generated $44 billion in sales in 2021, and sells around 60% of the high-horsepower tractors used in the U.S. and Canada. Deere has been guiding farmers toward a bigger leap into technology for almost 20 years, starting with an autopilot system on tractors and harvesters that is now a standard feature on nearly all of Deere’s large farm machinery.

That said, not all farmers appear to be enthused about John Deere’s technological choices.

Walter Schweitzer, a farmer new Geyser, Montana, who also serves as president of the Montana Farmers Union, said he worried that further linking farm equipment to software managed by Deere could give the equipment company greater influence over farmers’ operations, while collecting data to benefit Deere’s own technology development.

According to The Wall Street Journal, The Montana Farmers Union has joined other farm groups in pushing Deere to broaden access to the software and tools to repair and work on Deere equipment, so independent repair shops and farmers themselves could do more fixes.

In August of 2022, Gizmodo reported that a hacker named Sick Codes had demonstrated a way to jail-break John Deere tractors, which could allow farmers the opportunity to self-repair their equipment. According to Gizmodo, as farming and agriculture continue to automate, John Deere has found a sneaky digitally gate keep diagnosis of faulty tractor parts to ensure that farmers are forced to turn to the company’s own repair services.

In July of 2021, the U.S Federal Trade Commission unanimously voted to ramp up law enforcement against repair restrictions that prevent small businesses, workers, consumers, and even government entities from fixing their own products. This, essentially, puts the “right to repair” in place.

To me, it sounds like the farmers who are using John Deere’s equipment have the “right to repair” it themselves, without relying on John Deere to do that for them. Personally, I don’t think people who need to use specific equipment to do their jobs should have to be burdened with wondering what a big company will do with the data it collects from them.