Carl Pei (and a parrot) launched Nothing‘s Phone(1) today in London. Starting in a café, moving to a theatre and ending at the after party, it was a surprisingly brief run through of the new phone. 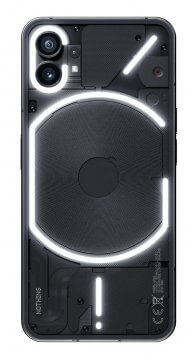 The big thing is the glyph feature on the back. Glyph’s will be familiar to anyone who has played Niantic’s Ingress but simplistically it’s four shapes on the rear of the phone: a circle in the middle, a vertical line bottom centre, an angled line to right and an oval C round the cameras. The glyphs are multifunctional and can synchronise with ringtones, indicate who is calling, show charging activity or simply act as a light while recording video. There are videos of the glyphs in action over on Instagram.

Moving to the rest of the phone, the body of Phone(1) has an aluminium frame with a Gorilla Glass 5 front. Everything that’s touched is made of premium materials and where plastics are used, over 50% is either recycled plastic or a bioplastic. In what’s believed to be a first, any tin used inside the phone comes from recycled materials.

There’s a 6.55″ AMOLED 2400×1080 pixel display supporting HDR10+ with a 120Hz refresh rate so it’ll be smooth too. There’s some clever trickery involving flexible displays to make the bezels even all round – now that’s an attention to detail.

Round the back, there are only two cameras but they’re both pretty good. Both are 50 MP sensors and the main camera is a Sony IMX766. The ultrawide is a Samsung JM1 with a 114 degree view. These sensors are widely used and should take decent photos. If you want to see some untouched photos from the Phone(1), there’s a selection here. 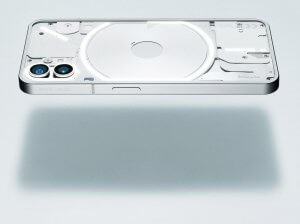 Inside is Snapdragon 778+ processor which provides stability whilst still being fast and smooth. Carl says, “Buttery smooth” – I think we’ve heard that somewhere else already but I’m sure it’s true. A 7-series processor fits nicely into the upper mid-range as per expectations. While it may be the current flagship for Nothing, it’s not going up against those £1000 top tier devices.

NothingOS is obviously based on Android and Carl was keen to point out that Android is good with loads of natice apps. There’s no need to re-invent the wheel, as it were, so it stays close to the original. Nothing will develop software where they can add value, and in the first instance there’s extra software that works with Tesla Cars and NFTs. Both are hot at the moment, so quite understandable.

The Phone(1) is available in both black and white, and there are three RAM and storage combinations with prices to match.

There will be open availability from 21st July but if you are really desperate to get one, hotfoot it round to the Nothing Kiosk in Convent Garden from 16th July.

Overall, The Phone(1) looks a good upper mid-range phone that’s priced a little below the competition: I’m thinking of the Xiaomi 12 and the OnePlus 9 though it’s a little more than the Nord 2. It will be interesting to see if the glyphs make interesting enough to stand out from the crowd.

Disclosure: I have a small shareholding in Nothing.