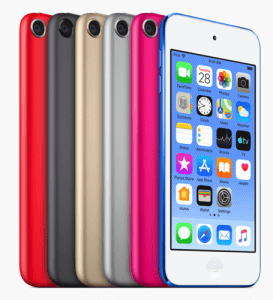 Apple announced in a newsroom post titled: “The music lives on”, that the iPod touch will be available while supplies last. This is the end of the run for iPod touch.

“Since its introduction over 20 years ago, iPod has captivated users all over the world who love the ability to take their music with them on the go. Today, the experience of taking one’s music library out into the world has been integrated across Apple’s product line – from iPhone and Apple Watch to iPad and Mac – along with access to more than 90 million songs and over 30,000 playlists available via Apple Music.”

There is a lot of hype in Apple’s newsroom post about all the wonderful things Apple has made – that can be used to listen to music – since the release of the original iPod touch on October 23, 2001. If you’re feeling especially nostalgic about this announcement, there’s a chance you can still buy an iPod touch through apple.com, Apple Store locations, and Apple Authorized Resellers while supplies last.

To me, this news is just the next in the long line of once prominent music playing devices that were very popular for a time – only to be replaced by the next, newest, version.

The original Sony Walkman was a portable cassette player. When it stopped production, Sony had built about 200 million cassette-based Wallkmans. The device was popular in the 1980s. The Walkman was replaced by the Discman which was launched in 1984. This device was able to play CDs and was about as portable as the Walkman. I doubt anyone, other than people who are fascinated will the 1980s, will miss these devices.

The Wall Street Journal reported that the first iPod, which was released in 2001, helped Apple co-founder Steve Jobs remake the company, extending its reach from computers to other personal devices and vastly expanding Apple’s reach in the music industry.

According to The Wall Street Journal, for some consumers, the iPod – which came in various color iterations and models, – was their first introduction to Apple. The iPod helped users usher in a new era for music in which songs could be downloaded for 99 cents – separated from albums by artists – and loaded onto a device about the size of a deck of cards.

The Wall Street Journal wrote that now, as smartphones have grown more sophisticated and music is largely streamed rather than accessed through paid downloads, iPod sales have diminished. Apple hasn’t separated iPod sales for years, but unit sales fell about 24% in fiscal 2014 compared with the previous fiscal year.

As such, the iPod, which replaced the Discman, is in the process of being replaced itself. Those who want to bring their music along with them can easily stream music through their iPhone, or iPad, from whatever streaming services they have access to.