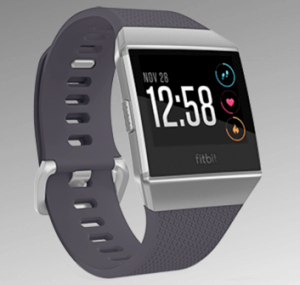 Fitbit announced, with the US Consumer Product Safety Commission (CSPS), a voluntary recall of Fitbit Ionic smartwatches. These were introduced by Fitbit in 2017 and stopped being produced in 2020. According to Fitbit, the battery in the Ionic smartwatch can overheat, posing a burn hazard.

The voluntary recall is specific to Fitbit Ionic devices only. It does not impact any other Fitbit smartwatches or trackers. Fitbit asks those who have a Fitbit Ionic to stop using their devices.

The CPSC provided additional information about the recall:

This recall only involves the Fitbit Ionic Smartwatch. It was sold with a polyurethane band and has a 1.4-inch color LCD screen. The watches were sold in slate blue/burnt orange, charcoal/smoke gray, blue gray/silver gray, and a special edition co-branded with Adidas in ink blue/silver gray. The smartwatch tracks activity, heart rate, and sleep.

Only the following models and colors are included in this recall. For the Ionic device, the model number (FB503) is on the back of the device where the band attaches. Fitbit is printed on the front of the Iconic Smartwatch.

Those who own a Fitbit Ionic Smartwatch should visit Fitbit’s official recall page https://www.fitbitionic.expertinquiry.com to start the process of finding out if they are eligible for a refund.

Engadget reported that Fitbit stopped selling the product in 2020 before being acquired by Google. Previous to the acquisition, Fitbit sold around a million Ionic smartwatches in the US and 693,000 internationally. Those who still own an Ionic can get a $299 refund for their device. They can also get a 40 percent off discount code for future purchases if they send in their old smartwatches.

It is good that Fitbit and CSPS are alerting consumers that the Fitbit Ionic has caused some people to get serious burns. Most people who use a smartwatch choose to wear it to track metrics like sleep, heart rate, and activity. Nobody should suffer a burn from a device that was intended to help people focus on their health.