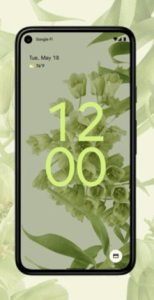 Google announced the release of the first beta of Android 12. It includes options for people to personalize their phone with a custom color palette and redesigned widgets. It also includes some privacy features, but not the one that I suspect Android users really want – Apple’s App Tracking Transparency.

Starting with Android 12 on Pixel devices, you’ll be able to completely personalize your phone with a custom color palette and redesigned widgets. Using what we call color extraction, you choose your wallpaper, and the system automatically determines which colors are dominant, which ones are complementary and which ones look great. It then applies those colors across the entire OS: the notification shade, the lock screen, the volume controls, new widgets, and much more.

There are also some new animations. For example, when you dismiss your notifications on the lock screen, your clock will appear larger so you know when you’re all caught up. Google also stated that Android devices are now faster and more responsive with better power efficiency so you can use your device for longer without a charge.

What about privacy settings? Macworld reported that you won’t find anything like Apple’s App Tracking Transparency feature. “To be fair, Google does include an option to turn off ad tracking. In Settings, there is a toggle to opt out of ads personalization, which tells apps not to use your advertiser ID to create interest-based ads.” This, Macworld reported, is similar to Apple’s “Prevent cross-site tracking” toggle “and is a good thing to turn off.”

MacWorld also points out: “To get a similar level of granularity you need to go to the Google tab in Settings, then Manage Your Google Account, Data & personalization, and finally Ad settings. Inside, you’ll find a dizzying array of options and preferences for Google and its partners as well as an ability to turn off access for individual apps and categories. MacWorld notes that Android users may not know those features exist, or that Google routinely changes the access.

In my opinion, if the most important thing about a smartphone is the ability to customize the interface – then maybe you will feel comfortable with Android 12. However, if you consider the ability to prevent companies and advertisers from tracking you through apps and across the internet – I would recommend you get an iPhone.