Streaming specialists Roku have added the Roku Express 4K to their UK line-up of devices bringing HDR10+ to UK range for the first time. Priced at £39.99, the Express 4K sits between the HD Express and the Premiere which already offers 4K and comes in the same “fig roll” shape as the original Express.

The Express 4K comes with dual-band WiFi (11ac) to deliver the extra bandwidth needed for 4K but to the delight of people who can’t get a strong enough wireless signal to deliver 4K, the Express 4K can be networked via the microUSB port on the rear, though the necessary gadget will be an optional extra.

“We are dedicated to providing users the simplest way to stream entertainment to their TV at an affordable price,” said Mark Ely, Vice President, Retail Product Strategy at Roku. “The new Roku Express 4K offers tremendous value as 4K streaming has become a benchmark in technology and entertainment. We believe consumers are going to be impressed with the quality they can get from Roku at this price point.”

Everything needed to get started comes in the box – Express 4K itself, remote with batteries, power supply, HDMI and USB power cables. It’s a simple remote which uses infrared, so the Express 4K has to have line-of-sight to the remote meaning the Express 4K isn’t suitable for hidden mounting round the back of the TV. If you need an out-of-sight Roku, look at the Streaming Stick+.

In a quick round-up of the tech features, the Express 4K everything up to 4K HDR TVs is supported (HD, 4K, HDR, HDR10, HDR10+). It will deliver 2160p at 60fps (3840 x 2160) and can upscale SD and HD programming. Audio-wise there’s DTS Digital Sound. The Express 4K works with all the major voice assistants: Amazon Alexa, Hey Google and Apple HomeKit. Apple’s AirPlay 2 is supported as well.

For the UK, the Express 4K is expected to arrive in May at all the usual retailers for GB£39.99. If, like me, you are wondering where that leaves the similarly priced Premiere, I suspect it isn’t long for this world. 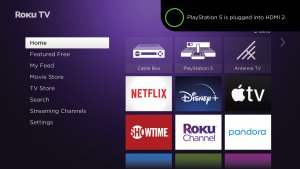 The Express 4K wasn’t the only announcement from Roku. The company announced RokuOS 10 with four significant improvements.

It’s good to see the Roku getting an update to keep it current. It’s definitely my preferred media streamer as it’s largely ecosystem agnostic, offering all the terrestrial broadcasters catch up services, plus the likes of Netflix, Disney+, Prime Video and YouTube. Regrettably, Google Play Movies is being merged with the user-generated content on YouTube but that’s Google just being stupid.