OnePlus‘ partnership with Hasselblad and the recent launch of the OnePlus 9 series of smartphones have been greeted with almost universal acclaim. To celebrate this and the open sale of the 9 Pro, OnePlus’ latest crazy publicity stunt has been to generate a “moonbow” in London and capture it with the OnePlus 9 Pro.

What’s a moonbow? Officially, it’s much like a rainbow but with moonlight rather than sunlight creating the bow. In this case, OnePlus have cheated a little and put the rainbow round the moon by generating a cloud of mist and a high-powered light. Regardless, it’s still pretty impressive. 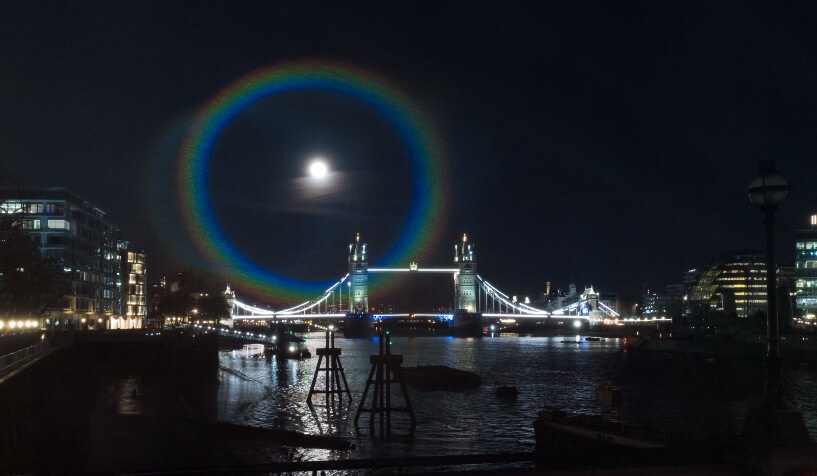 Naturally occurring moonbows are very rare, mainly because the light from the moon isn’t anywhere near as bright as sunlight, so it’s extremely hard for the human eye to spot the spectral colours in the dark. OnePlus helped out to make it a bit easier to spot – “Using high-powered light projections beamed through a wall of mist set under the perfect light conditions of the full moon, OnePlus created London’s very own first-ever man-made Moonbow in front of Tower Bridge, shot on the OnePlus 9 Series. The man-made Moonbow took 12 hours of on-site build time, used 60 tonnes of environmentally friendly recirculated water an hour and was created by a high power 20,000-lumen light projector.”

Of course, the moonbow had to be captured using a OnePlus 9 Series camera, co-developed with Hasselblad. Their emphasis is on natural colour calibration and while I wasn’t actually there to take the photo, it seems pretty realistic and I’d be happy with the photo if I’d just taken it on my smartphone.

At the moment, OnePlus is running a series of photo competitions based on a number of weekly themes – True Attitude, True Love, True Freedom and True You. Each week Hasselblad photographer Julius Hirtzberger will choose a winner from photos tagged with #TrueColors on Instagram. The winning photographers will receive a OnePlus 9 Series handset and other goodies. Visit @oneplusunitedkingdom for more details.