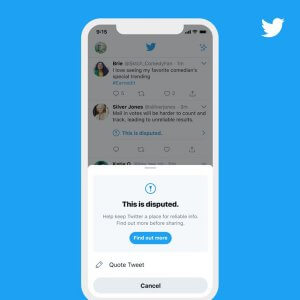 Twitter users have probably seen some tweets that have had labels added to them. This began ahead of the 2020 election. At the time, Twitter users could not retweet a labeled tweet. They could, however, quote tweet them and add their own commentary.

Giving context on why a labeled Tweet is misleading under our election, COVID-19, and synthetic and manipulated media rules is vital.

These prompts helped decrease Quote Tweets of misleading information by 29% so we’re expanding them to show when you tap to like a labeled Tweet.

I tested out Twitter’s new restrictions on clicking like on a labeled tweet. When I clicked like, a small pop-up appeared that said: “The claim about election fraud is disputed” in bold text. It also said “Help keep Twitter a place for reliable info. Find out more before liking”. The pop-up included a button that said “Find Out More”.

I clicked the “Find Out More” button, which lead to a Twitter curated page with facts that show that voter fraud is exceedingly rare in the United States. Plenty of articles that back up that assertion can be found there.

What happens if I don’t want to “Find Out More”? There is a small, empty, heart on the pop-up at the bottom, with the word Like next to it. It is still possible to like a post that has been labeled as misleading from that pop-up – even if the user didn’t proceed to the fact-checked information. The pop-up slows people down, and functions as a deterrent for people who click like without thinking about it first.

Twitter’s original plan may have been to put the restrictions on labeled tweets ahead of the election, and perhaps revert back after Election Day. Twitter is continuing to use those restrictions. To me, it makes sense to do this because there are people on Twitter who continue to post misinformation about voting and the outcome of the election.