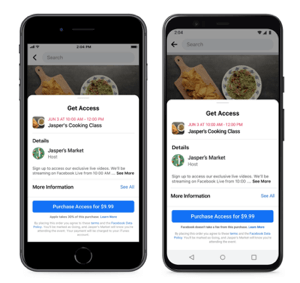 Facebook has launched a way for small businesses, creators, educators, and media publishers to earn money from the online events they host on Facebook. Page owners can create an online event, set a price, promote the event, and host the event, all in one place.

To me, the description Facebook gives this new feature sounds like it was influenced by COVID-19, and the limitations that small businesses are facing as a result. I also think Facebook had another reason for launching this now. Part of their post about it on Facebook Newsroom takes a swipe at Apple, and the company’s 30% App Store Tax.

We asked Apple to reduce its 30% App Store tax to allow us to offer Facebook Pay so we could absorb all costs for businesses struggling during COVID-19. Unfortunately, they dismissed both our requests and SMBs will only be paid 70% of their hard-earned revenue.

It is good that Facebook is waiving the fees on the paid online events that businesses and creators host on Facebook. I find it interesting that Facebook promises to waive those fees for an entire year. It is unclear exactly what happens regarding those fees after that deadline ends.

Interestingly, Facebook appears to be taking this opportunity to try and paint itself as the “good guys” who just want to help out small businesses and creators. They look better than Apple does at the moment. The cynical part of me wonders if Facebook is attempting to use this situation as an opportunity to get out of the 30% App Store tax that Apple requires in order to allow Facebook Pay on the App Store.