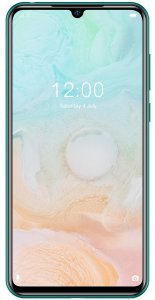 While in grave danger of being eclipsed by another smartphone announcement, DOOGEE have launched the N20 Pro smartphone, an entry-level Android 10 handset from a company usually associated with rugged waterproof devices that could do serious damage if thrown across the room. In this instance, the N20 Pro is a much more traditional design which is unlikely to generate a second glance.

For those unfamiliar with DOOGEE, the company is a Spanish-Chinese enterprise founded in 2013. The company claims to be the “world leading rugged phone brand” and their flagship tough phone carries IP68, IP69K and MIL-STD-810G certification. That’s hardcore.

Regrettably the N20 Pro is more likely to see the inside of mall than a rain-soaked jungle. There’s a 6.3″ IPS FHD+ display (1080 x 2280 pixels) of glass powered by a 2GHz Helio P60 octa-core processor. Inside, it’s 6GB of LPDDR4X RAM,128GB of storage and support for up to 512GB of additional storage with a microSD card, which isn’t bad at all.

There’s dual SIM support, though the second SIM slot is also home to the microSD card, so it’s one or the other.

Round the back, there’s a quad camera array: 16 MP main camera, 8 MP 130° ultra-wide camera lens, 2 MP portrait camera and 2 MP macro camera. On the front, there’s a tear-drop 16 MP selfie camera. Keeping the contents of the phone safe, the N20 Pro has a rear fingerprint sensor, with face unlock available for those too lazy to lift a finger.

I’ve never actually tried one of DOOGEE’s phones but hopefully I’ll be able to get one in for review soon.

[Update: a previous version of this post incorrectly gave the retail price as US$169]