Motorola‘s been firmly established as the go-to provided of mid-range phones with its long running g-series of handsets, but the absence of a top-end phone has been noticeable, despite the appearance of a rebooted Razr. Fortunately, Moto have addressed this with the launch today of two new devices, the Edge and Edge+. Motorola reckon these will be the fastest, loudest and boldest. 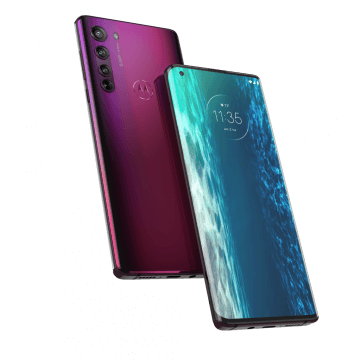 This time round, Motorola are sticking to the traditional flat slab format – there are no folding screens here. The Edge+ is the high-end flagship supported by the less powerful Edge, which is still well above the g-series in terms of spec.

Both use the same screen each sporting a 6.7″ 21:9 aspect ratio “Endless Edge Display” with HDR10+ and 90 Hz refresh rate. It’s a 10 bit FHD+ OLED display and as is the fashion, it’s curved at the sides, though it seems the curves have quite a small radius, giving a significant edge to the screen (has the penny dropped?) Motorola are taking advantage of this Edge for actions – swipe down to show notifications, notifications – it’ll glow when a call comes in, and status, showing battery level when charging. There’s demo video here. 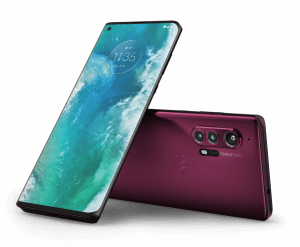 Under the hood, they’re both sporting the popular Qualcomm Snapdragons, but the Edge+ gets the faster Snapdragon 865 paired with 12GB of LPDDR5 RAM and 256GB of storage. This combination of processor, RAM and storage appears to be the definition of high-end for 2020. The Edge takes the Snapdragon 765, with 6 GB RAM in Europe (4 GB USA) and 128 GB of storage, though this can be supplemented up to 1 TB with a memory card.

Unsurprisingly for 2020, both phones are 5G devices, with the Edge+ working with both mmWave and sub-6GHz frequencies. There’s WiFi 6 in there too.

A 5000 mAh battery will keep the Edge+ phone powered up for two days in normal use, though what constitutes normal will clearly vary. The Edge has a slightly smaller 4500 mAh battery and much like the OnePlus 8 series, the Edge+ has wireless charging (15W) but the Edge doesn’t, surviving with only 18W TurboPower wired charging.

With dual stereo stereo speakers and precision audio tuned by Waves Audio, both Edge phones have the loudest, most powerful audio on a smartphone, and in news that will delight audiophiles, the phones both retain the 3.5mm headphone jack.

Regrettably, the Edge+ won’t be coming to the UK and it’s a Verizon exclusive in the US to run on their superfast 5G. It’ll be available in the US on 14 May priced at a cool US$999. In Europe, residents of Italy, Scandinavian countries and Serbia will be able to get their hands on the phones.