OnePlus typically announces new models in the spring and the autumn, and despite Covid-19 this year is no different with the launch today (14th April)  of the OnePlus 8 and the flagship 8 Pro. Fortunately, I was sent a pair of review handsets and in this article, I’ll be going over the flagship edition, the 8 Pro. As will be seen shortly, the Pro has a couple of new features that bring OnePlus back to the top of its game. Let’s take a look. 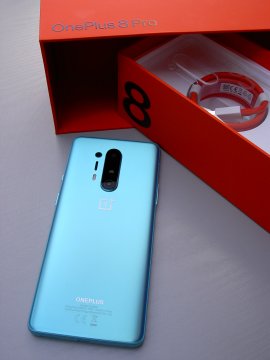 The 8 Pro comes in rectangular box, bathed in the usual OnePlus red. Inside the box, the phone comes initially clothed in a slightly opaque covering. Once unwrapped, the frosted glass Glacial Green on the back becomes apparent. It’s lovely, both to look at and hold. There’s a slight matte texture to the rear glass so it’s not super slippy to hold (unlike my 6T), but you’re going need a case, and OnePlus kindly includes a transparent bumper case in the box too. In terms of colours, the Pro will offer two colour options in the UK. Onyx Black which will have 8 GB RAM and 128 GB storage, and Glacial Green with 12 GB RAM and 256 GB storage. A third colour, Ultramarine Blue, will not available in the UK. I know the rear looks blue in the photos but that’s the way the back reflects light under different conditions.

Physically, the phone is 165.3 x 74.4 x 8.5 mm and weighs in at 199 g, so it’s slightly taller than you might expect but this is reflected in the screen’s 19.8-to-9 aspect ration. More on the screen in a minute… Returning to the physical characteristics, it follows a similar layout to most OnePlus phones. USB-C port on the bottom, volume controls on the left, power button on the right, alert slider (yay!) on the right above power, cameras on the back. The SIM tray is at the bottom next to the USB port and supports two SIMS that are inserted back-to-back. A SIM ejection tool is included. There’s no audio socket and there hasn’t been for a couple of generations, but in an OnePlus first, the 8 Pro comes with an IP68 rating, meaning it will withstand water ingress at 1.5 m for 30 minutes. Perfect in case you have a little accident (but I didn’t test this). 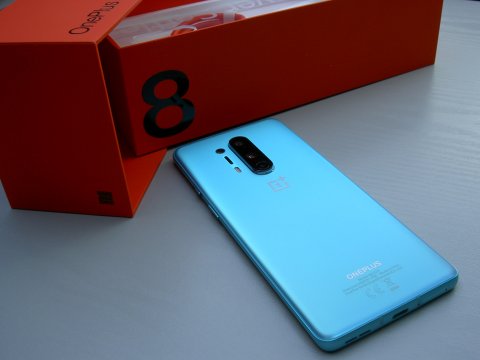 For the screen, the 8 Pro has a gorgeous 120 Hz “fluid display” which scored the Best Smartphone Display accolade from DisplayMate, getting top scores in ten different areas. I can’t comment on that level of detail other than to say it’s pretty impressive. It’s very fast, it’s clear and the colours look fantastic. With a resolution of 3168 x 1440 pixels and a screen size of 6.55″/6.78″, it comes out as 513ppi. I can’t see the dots. The screen has rounded edges, hence the two measurements for size. It’s an AMOLED screen with 3D Corning Gorilla Glass on top keeping it safe. The display supports HDR giving blacker blacks and whiter whites, and the colour accuracy has been improved too with 10-bit colour representation. There’s an in-display fingerprint sensor which is impressively fast – it’s noticeably quicker than the one on my 6T.

Under the hood, there’s a Qualcomm Snapdragon 865 CPU, paired with an Adreno 650 GPU. The RAM is LPDDR5 which is both faster (30%) and more energy-efficient (20%) than the previous generation. Storage is courtesy of UFS 3.0 at either 128 GB or 256 GB, though there are couple of new tricks to improve performance. 5G is courtesy of the X55 chipset and WiFi 6 is supported. Performance-wise, after three runs GeekBench 5 gave average scores of 893 single-core and 3302 multi-core which comfortably beat last year’s 7T. 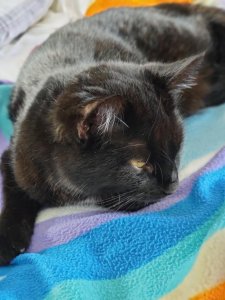 Unlike previous the previous two Pros, the 8 doesn’t have a pop-up selfie camera and instead has a discreet hole-punch 16 MP camera in the top left of the screen. Round the back, the 8 Pro has four other cameras; a 8 MP 3x telephoto with OIS, a 48 MP ultrawide with a nearly 120 degree field of view, a 48 MP main camera and a 5 MP colour filter camera. The front camera, the ultrawide and main camera all use Sony sensors. The cameras do stick out the back by a couple of millimetres, so a case of some kind is going to be essential. The camera app itself has been improved to take advantage of the cameras automatically and will sometimes suggest that a photo would be better taken in a different mode. If you want bokeh, the portrait mode does a good job blurring the background. I was really impressed by the level of magnification that was possible – I took a photograph of a horse and could zoom in on my PC to see the individual eyelashes round her eyes.

For video, the 8 Pro uses both OIS and EIS together for smooth video, and a technology called 3-HDR which enhances lighting in video. It’s impressive especially when there’s a strong backlight.

The two photos below were taken from the same spot at nearly the same time. The upper one is the ultrawide, the middle is the main camera and lower one is the telephoto.

The colour filter camera lets you do funky things with the colours. I haven’t quite figured out all the settings but here’s my shed. Yes, it’s in need of paint, but the one on the left is colour enriched and on the right, it’s erm, different. Perfect for standing out on Instagram. 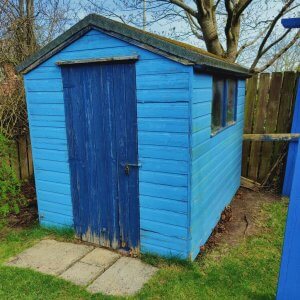 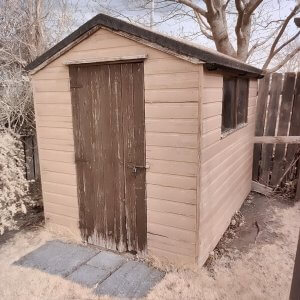 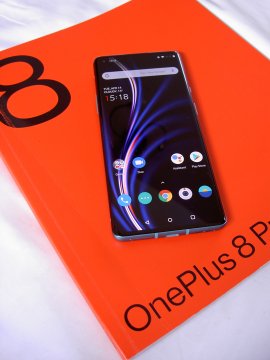 Inside the phone is a 4510 mAh battery which gives absolutely oodles of power. In what I think of as ordinary use, I got the best part of two days out of a charge, but yes, game playing is still energy expensive. The other new feature relates to battery longevity. The perceived wisdom is that keeping lithium-ion batteries at 100% is not optimal and that overtime the capacity of the battery degrades. The 8 Pro now has a feature (undoubtedly powered by AI) where the phone uses behaviour patterns to predict when 100% charge is needed and to charge to hit the target. For example, if you plug the 8 Pro in at night just before going to bed, it won’t start charging until say, 0530, knowing that you usually grab the phone while having breakfast at 0700.

Based on Android 10, OxygenOS has seen a few improvements here and there but retains its closeness to stock Android that is very much part of its appeal. The most obvious of these is dynamic backgrounds which swirl and morph when the phone is turned on or you swipe between launcher pages. It’s really fun. There’s also motion estimate and motion compensation (MEMC) to smooth video playback on the 120 Hz screen. It’s intended to interpolate frames, and reduce motion blur and ghosting, when watching films and videos recorded at lower frame rates. The feature can be turned off, but Netflix looked and sounded great.

Games play really well on the 8 Pro. I tried out Call of Duty, X-Plane and Galaxy on Fire for starters and they’re all great. The 8 Pro includes “gaming mode” and “fnatic mode” which lets you tailor the gaming experience by devoting resources and blocking notifications when you’re in the zone, as it were. It’s a super smooth experience. In addition, Google Stadia is coming to the One Plus 8 Pro and other OnePlus phones.

Overall, this is a flagship phone with premium materials and high-end features. The feel in the hand is lovely, the cameras are impressive, the display is gorgeous. And the new features like 5G, IP68 and wireless charging are all very welcome. I’m not going to pretend the 8 Pro is cheap, because it’s not, but you are buying a great phone.

Thanks to OnePlus for supplying the 8 Pro for review.