Budget airlines have revolutionised air travel over the past few decades, and while the seats might be cheap, putting luggage in the hold can be pricey: I was recently on a trip where the ticket price trebled when hold baggage was added, so you really want to try and get everything into your hand luggage to get the cost down. Clothes can be bulky, though, and it’s difficult to get everything needed into a small trolley case.

Sitting on the bag in the hope of getting the zip done up isn’t the solution, but the Masterspace Pacum Travel Vacuum Compressor might be. It’s a personal vacuum packer, meaning the clothes go in an airtight bag before the air is sucked out by the Pacum, squeezing the garments down to a fraction of their size. That’s how you get more clothes in the trolley case. Let’s take a closer look. 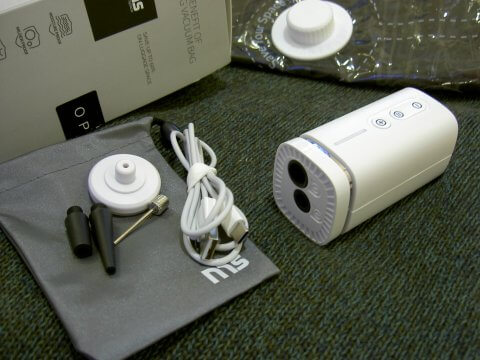 The Pacum comes in a box which belies the diminutive size of the Pacum itself. Available in three colours; red, white and black, the Pacum is smaller than a 330 ml drinks can and is more rectangular than round. The actual dimensions are 86 x 43 x 43 mm and weighs in at 145 g. The Pacum looks good with features on three of the six surfaces. On the bottom are two rubberised air holes, one for vacuuming and one for inflation. On the top is a USB C port for powering the Pacum and on the side are three buttons for Eco, Super and Inflation modes.

In the box, there’s the Pacum itself, a 1 m USB C cable, a Pacum vacuum bag and adaptors for other vacuum bags, pool toys and sports balls, plus a small travel drawstring bag. To be clear, there is no USB charger supplied and, contrary to my first thoughts, there’s no battery in the Pacum either. It’s fully powered by the USB C port on the top, and a 2 A power supply is required, either from a mains charger or a battery pack. 1 A will not work and the Pacum will cut out with a flashing red light. Trust me on this. 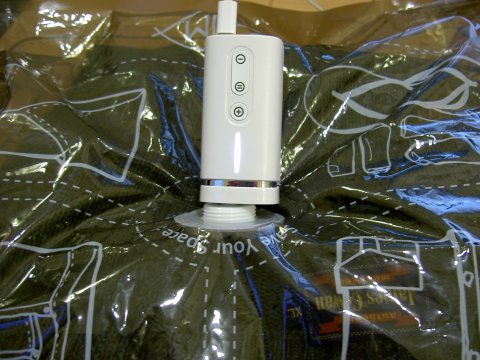 Ready to go on your holidays? Put the clothes you’re taking into the vacuum bag and arrange them to suit the available space in the luggage – you’ll not be able to do this afterwards. Close up the bag and make sure it’s properly sealed along the edge. Unscrew the cap in middle on the vacuum bag and then slip the Pacum over the nozzle. It uses the larger of the two air holes on the bottom so it’s hard to go wrong.

Assuming that the power cable is plugged in to suitable power source, pressing either of the two “minus” buttons (-) and (=) will start the Pacum up in either Eco or Super mode. Simplistically, Super sucks harder than Eco, although I can’t really see any good reason to use Eco mode. While sucking, the light on the Pacum flashes blue and it’ll go red if there’s not enough power being supplied to the device. 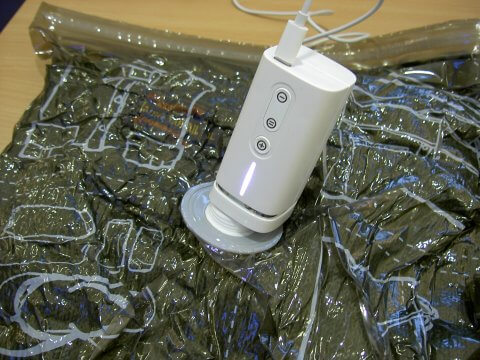 Using the supplied bag with a couple of t-shirts and jumper (that’s a sweater for those across the pond), it took about 90 seconds for the Pacum to evacuate all the air from the bag, resulting in a stiff but thin packet that uses a fraction of the original space. The two before and after pictures show the difference and you can watch my review video below.

The main purpose for Pacum is to remove air from vacuum bags, but that’s not its only trick. Inflating holiday pool toys usually involves much huffing and puffing, but Pacum will pump up the inflatables in no time. Use one of the three adaptors in the air outlet and press the Inflation (+) button. It would take awhile to inflate a large paddling pool but makes short work of rubber rings and footballs. The air outlet looks to be a standard size, so existing adaptors will likely work fine with the Pacum.

My only real gripe with the Pacum is that the supplied USB C cable is frustratingly short at only 1 m and would recommend twice the length for any practical use. Yes, you might get lucky with a hotel that has sockets on the counter but frequently they’re down behind the bed which is just a PITA with a short cable.

Overall, the Pacum is really neat little gadget that’s well-designed and works as described. Is it worth buying? Ultimately that’s a maths problem. If you fly frequently or travel as a family, I imagine it will be easy to save money with the Pacum by reducing or avoiding hold luggage charges. Do the sums.

There’s more in the unboxing and demo video below.

Thanks to Master Space for providing the Pacum for review.