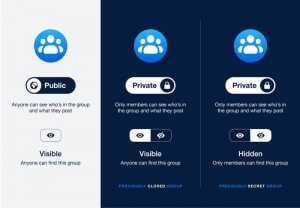 Facebook announced some changes that are designed to keep people safe within Facebook Groups. In part, Facebook will hold Group admins accountable for what is posted in their group.

Facebook says one way they keep people safe is by proactively identifying and removing posts and groups that break their rules. Facebook has been using AI and machine learning “to proactively detect bad content before anyone reports it, and sometimes before people even see it.”. It also uses human moderators.

Here are some factors Facebook considers when deciding if a Group should come down:

It sounds like people who participate in Groups on Facebook really need to choose wisely when selecting admins. Facebook’s emphasis that their rules apply within Groups is likely going to deter those who have been de-platformed from other online spaces. I guess that’s one way to help keep people safe in Private Groups.