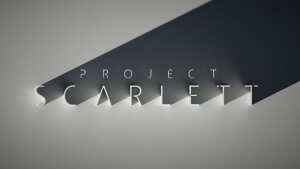 Microsoft introduced Project Scarlett at the Xbox E3 2019 Briefing. It is for players who want a console designed, built, and optimized for gaming. Project Scarlett is arriving Holiday 2020.

Project Scarlett will set a new bar for console power, speed and performance, arriving Holiday 2020 alongside Halo Infinite. With a custom-designed AMD processor, high bandwidth GDDR6 memory, and a next generation solid state drive (SSD), Project Scarlett will give developers the power they need to bring their creative visions to life. Thousands of games across four console generations will look and play best on Project Scarlett.

A video about Project Scarlett provides some more details. There is mention of reduced load times, where the game stops and players have to wait around for the next part to load. Microsoft’s goal with gaming is to not have those pauses.

Project Scarlett has a custom designed processor that leverages the latest Zen 2 and Navi technology from their partners at AMD. It makes processing four times more powerful than the Xbox One X. It also leverages high bandwidth GDDR 6 to ensure the best performance possible.

In the video, there is mention of giving gamers the option to connect across devices and across platforms in a way that Xbox was never able to do before. Your games, your achievements, your progression, your accessories – your console experience with Xbox all comes forward with Scarlett.

It sounds like Project Scarlett and Google’s Stadia will compete against each other for the attention of gamers. Both are being released at roughly the same time, during the holiday season. Scarlett has the advantage of already having a dedicated player base who currently play on Xbox consoles.