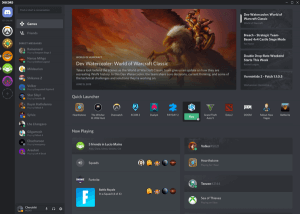 Discord is used by a whole lot of people who enjoy playing video games. Pop into Discord, and you might see the name of the video game that a friend of yours is playing at that moment. Discord has added a new feature that lets you see what games all your friends are playing. It is called the Games tab.

The Games tab is your new home. It’s warm, cozy, and has all your Discord happenings in one place.

The Games tab will show you:

The Now Playing feature will give you a quick view of what your friends are currently playing. Discord will automatically add anyone on your friends list who you chat with. Discord will also add users who you have talked to in voice chat recently, along with others from servers you chat on. You can also add friends.

Depending on the game being played you’ll get a quick view into who is taking part. If they are a member of one of your servers and in a voice channel, you’ll be able to quick jump over to the server so you can join in the conversation. If the game being played supports direct invites through Rich Presence, you can even join into the game right from that screen.

The Games tab will show you news about your favorite games, including the latest updates, patch notes, and clips.

If you are a Discord user who is located in the European Union, Discord will not automatically populate the Games tab for you. Instead, you will be asked via a pop up if you would like to add these features.

Discord users located anywhere else will automatically have these features enabled. The Discord blog post shows how to opt-out of them if you want to.