Kraken Dice makes polyhedral dice sets for RPGs. They have a Kickstarter for their new Iconic Mythical dice collection. At the time I am writing this, the Kickstarter has five days to go and has reached (and exceeded) its funding goal. 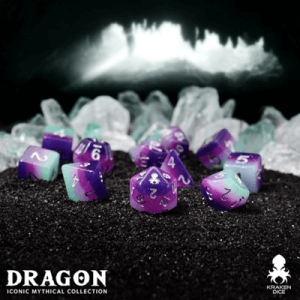 Each set is beautifully colored and named after a mythical creature: Unicorn, Mermaid, Phoenix, Nymph, Dragon, and Fairy. When the Kickstarter hit their $20,000 funding goal, the Unicorn, Mermaid, and Phoenix sets of dice became available to all backers. This includes the 11 piece set, d10 sets, d6 sets, and the expanded spellbook.

At the time I am writing this, the Kraken Dice Kickstarter has $439,816. This has enabled them to unlock additional sets of dice, including the Nymph, Fairy, and Dragon sets along with several other sets, stickers, d2 coin, and a Silver Glitter Iconic d20. Those who are interested still have a few days to back the Kickstarter.