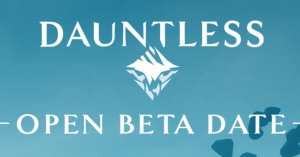 Phoenix Labs has announced the date of the Dauntless Open Beta. Phoenix Labs thanked everyone who had joined the Closed Beta and shared their feedback.

We’re dedicated to expanding the world of Dauntless with your continued feedback and inspiration. Open Beta is an exciting milestone, but we’re still far from done. We will continue to create the game that Slayers will be proud to call their own for years to come. You can stay up to date with what’s coming to Dauntless at the Dauntless Road Map.

Phoenix Labs said that the Open Beta signals a foundational level of stability and permanence. They will be looking to players to provide hands-on feedback with the new improvements and systems that are coming to the game.

In order to fully Beta test the changes that Phoenix Labs is making to progression, island exploration, and other systems, they will be performing two full-server wipes in the coming months. The first one will happen on May 2, coinciding with the release of a major update to progression and Evergame content. The second full-server wipe will take place on May 22, in preparation for the Open Beta.

Phoenix Labs will be announcing a reward structure for current Beta testers. “Depending on your progress in the current and future stages of the Closed Beta, you will receive special cosmetic items as a reward for your support.” More details about that will be coming soon.