Playing games using bare hands for controllers goes back as far as the Eye Toy for the Sony PlayStation 2 but it was really Microsoft’s Kinect that brought gesture recognition mainstream. Fantastic as these cameras were, players only received visual feedback, e.g. the in-game character moved in the desired direction. But what if there is no TV screen to show feedback? How could the user know that they’ve pressed the right button? That’s where Ultrahaptics come in with their ultrasonic speakers. Todd gets a feeling for the tech with Heather. 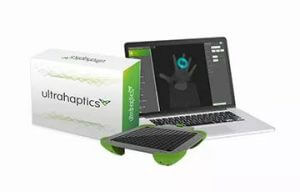 Simplistically, Ultrahaptics uses ultrasound to project sensations onto a hand. Small highly controllable speakers can focus sound waves to make a hand feel on object that’s not there. It’s pretty clever technology but what it means is that a hand action can receive feedback directly, without needing a screen.

Heather splits the use cases into two, controls and experiences. Want to turn on a light switch? Feel the imaginary switch and flick it up. For experiences, a two-dimensional object could be given three-dimensional properties. Think of a film poster that responds to a hand approach it. The force awakens!