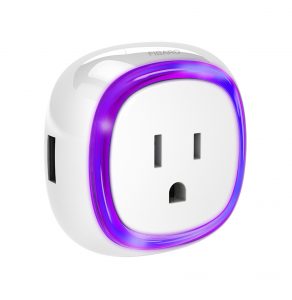 Wall Plug is a small outlet that gives any electrical device the ability to be controlled by popular Z-Wave smart home hubs, including Fibaro’s Home Center 2 and Home Center Lite, and also monitors power levels and energy usage.

Available in two versions, with a standard plug or standard plug with additional USB port, Wall Plug is an intelligent outlet adapter that monitors power consumption. Easy to set up, users can insert the Wall Plug into any standard outlet and push a button to connect it to a Z-Wave network.

Once a device is connected, an LED ring provides a visual cue of the device’s current power load, changing color according to the amount of power being drawn. If the device temperature increases, a purple warning light flashes.

When Wall Plug is connected to Fibaro’s Home Center Lite or Home Center 2, users can identify the devices that are using the most energy and set a maximum power limit for each connected device. If power consumption goes beyond the specified amount, the Wall Plug will automatically shut down power to that device. The system also instantly alerts users of any problems via SMS or email and can activate pre-defined scenes via any connected devices.

Unique to Wall Plug is a feature that allows users to test the Z-Wave network range indicated by a change in the LED ring’s colors. Perfect for households with young children, Wall Plug includes a soft glow setting that can be activated when used as a night light.

Users can also check the current energy consumption of other connected devices throughout the home within the configuration interface of Fibaro’s Home Center 2 or HCL controllers.

Using a computer or the Fibaro mobile app, users can see clear and detailed graphs of historical data, pie charts showing the energy drain of each connected device, and a list of the top five energy consumers in the home. Users can make changes on the fly to improve efficiency.