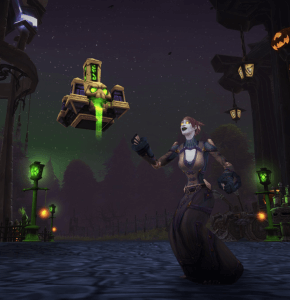 The Hallow’s End event happens every year in World of Warcraft. It is clearly a Halloween-inspired event, and one that I personally find to be a lot of fun. Hallow’s End started today, October 18, 2017, and will end on November 1, 2017.

There are some new things added to the Hallow’s End event this year. One is called “Exquisite Costume Set: Xavius:, which looks like a demon. The other is a two-piece Horse costume. One player wears the head of the horse, and another player follows them around dressed as the tail of the horse.

There is a brand new pet called Naxxy. It is a small replica of Naxxramas, a giant necropolis that floats over two zones in World of Warcraft. Naxxramas is a raid dungeon. The way to obtain these special items is to collect in-game currency by trick-or-treating at the inns.

This change might give players a better chance at obtaining The Horseman’s Reins (a special, and highly sought after, mount).  Brand new players can get to level 23 in a reasonably short amount of time.  Players who have several low-level alts, that are at least level 23, can queue them up for the Headless Horseman encounter.  The Horseman’s Reins have to drop eventually…. right?