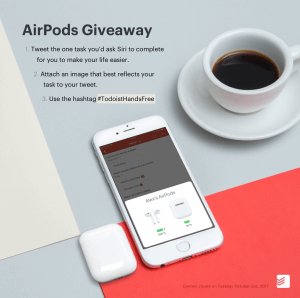 Todoist wants you to get the most out of Todoist for iOS 11 with a new pair of AirPods. They point out that the headphone jack not likely to return to iPhones anytime soon. Todoist is giving away a new pair of AirPods so you can enjoy all of the wireless productivity with Todoist and Siri.

To enter the Todoist contest, you need to do three things:

2. Attach an image that best reflects your task to your tweet.

Doing that, and you will automatically be entered to win one of three pairs of Apple AirPods. This contest closes on Tuesday, October 3, 2017. Three different winners will be randomly chosen out of all proper entries and will be announced on Twitter within five business days of the contest closing.

For the purpose of the contest, you can tweet a task that you want Siri to complete for you that would be entirely impossible for Siri to actually do. The example given by Todoist is “Hey Siri… organize my closet.”

My best guess is that the purpose of this contest is to make people aware that you can use your AirPods to quickly ask Siri to add something to Todoist for you. The blog post about it says “Just double tap either AirPod, ask Siri to add a task to your Todoist, and continue on your merry way.”