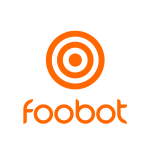 While air is all around us, colourless and odourless, we often seek a semi-mythical fresh air; at the seaside, in a spring meadow, after rain on a summer’s day, on crisp winter morning. We all have our favourite. On the other hand, bad air can be difficulty to identify too. Unless there’s mould on the wall or the smell of fresh paint, many pollutants are invisible too.

Around 5 million people in the UK suffer from various levels of asthma and for people with this condition, air quality can be an important factor in their quality of life. This was a reality for Jacques Touillon, whose son suffered from asthma. Back in 2014, he started a successful Indiegogo crowdfunding campaign for an indoor air quality monitor called Foobot (formerly Alima) and now the Foobot is available for sale in North America, Europe and Australia. Let’s take a look. 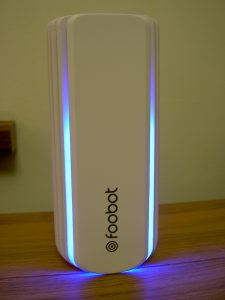 The Foobot is a semi-cylindrical gadget a little taller than a smart phone (17 cm), with what looks like an air vent on top. It’s not dissimilar to an Amazon Echo, only a little shorter. Unlike the Echo, the Foobot has sophisticated sensors to measure gases and chemicals in the air, glowing blue when air quality is good and orange when poor. In particular, the Foobot measures: 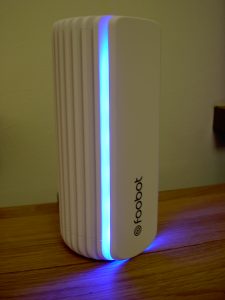 As a smart device, the Foobot integrates with other smart home solutions, from Google Nest to Amazon Echo, and with the help of IFTTT, Foobot can also connect to over 120 home appliances, including Hive, the connected thermostat from British Gas. Of course, there’s a complementary smartphone app for iOS and Android that shows both real-time and historical information.

Powered by a USB charger, the Foobot connects via wifi and the setup procedure is very straightforward, using the clever trick of turning the Foobot upside down to initiate the start up procedure. The app then gets the wifi connection established, owner’s account set up, timezone confirmed, room location set, Celsius v Fahrenheit chosen. All exactly what you’d expect from an indoor air quality monitor. 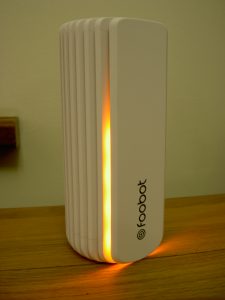 What you might not expect is that the Foobot takes about a week to calibrate the sensors and settle down. Until this happens, there are warnings about the inaccuracy of the readings and some app features like notifications and alerts are unavailable until the bedding in period is complete.

Although light on the detail, the Foobot does colour itself to express air quality based on the GPI – the Global Pollution Index. Information on how it’s calculated is a little sparse though apparently it’s “a weighted compound of the different pollutants measured by Foobot“. Smaller is better, so less than 25 is great, 25-50 is good, 50-75 is fair and 75+ is poor (just move out). The Foobot will glow blue for great and good, and orange for a GPI over 50. The length of the lights is an indicator for how good or bad the GPI is. 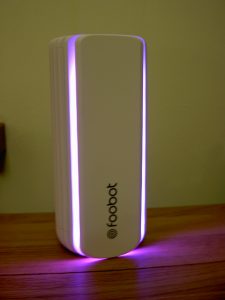 The Foobot glows lilac if you disturb it by rocking or tapping it. The smartphone app will register and notify on the disturbance too. They’re called “knock knock” notifications and Foobot suggests they could be used to tell a parent that a child is home safe.

The really juicy stuff is in the smartphone app which is a free download from the relevant app store. To start with, the colour of the app will mimic the Foobot but more detail on the level of Particulate Matter, Volatile Compounds and Carbon Dioxide is available.  Humidity and Temperature are shown too. A couple of different views present the information in varying levels of detail. 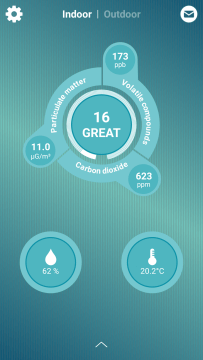 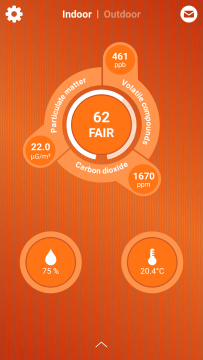 Swiping up from the bottom shows historical information and swiping left or right moves between the measures. The information is presented by minutes, hours, days or weeks. 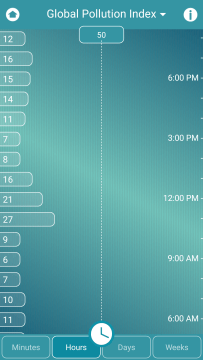 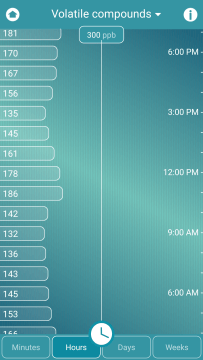 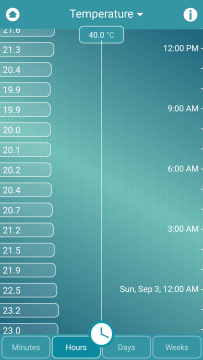 The Foobot app supports notifications and if any threshold is breached, sends the app a notfication. Notifications can be individually controlled but the thresholds seem fixed. Here in Northern Ireland it’s fairly damp much of time so the default 60% humidity threshold meant that I got lots of notifications. I turned it off.

Along with the notification, Foobot asks for clarification on what you think might have caused the peak and offers the choice of things like cleaning and cooking. One curious option is “olfactive decorator” which I think translates to “smelly paint”. 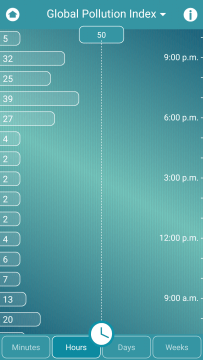 What surprised me was how much air quality was affected by people being around. The graph on the right shows a day where there was no-one home between 9-5 and we got an early night. During the day and night, the GPI drops to less than ten when there’s no-one about, but jumps up as soon as someone’s home.

The Foobot app has a couple of other settings. The intensity of the LEDs can be adjusted and the LEDs can be put on a timer so that if the Foobot is in, say, a bedroom, they can be timed to go off at night. 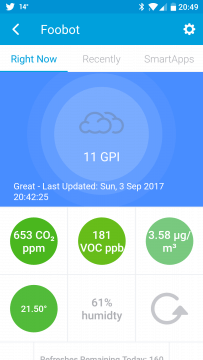 As a smart device, the Foobot can be integrated with other smart home systems to do clever things. There is official integration with Alexa but at the moment it’s limited to asking Foobot for an air quality summary (GPI), and turning the Foobot’s lights on or off. You can’t get specifics of temperature, humidity, VOC or particulates.  On the other hand, you can unofficially integrate Foobot with Samsung SmartThings to get this information – see left. There’s integration too with Nest and Lux thermostats from within the Foobot app: I don’t have either of those so couldn’t test further. At a higher level, there’s integration with IFTTT so there’s plenty of options there too. If air quality poor, turn up the ventilation….

What improvements would I like? Two things come to mind….one, for the alert thresholds to be adjustable to allow for damp countries and, second, for there to be a specific detection and alert for carbon monoxide (CO) with the option of alerting multiple people should it be sensed. CO is a dangerous poisonous gas produced by burning gas, wood, propane, charcoal or other fuel that kills people in their sleep. I have a gas-burning stove in my home so I’m always conscious of this risk (yes, I have a CO-detector).

Overall, the Foobot does what it sets out to do – it measures indoor air quality – and if you do have a family member who suffers from a condition affected by air quality I think the Foobot is money well spent. I’ve had the Foobot operational in my home for about two months over the summer and I can already see trends associated with weather and indoor activity such as cooking (or burning!). If you are then able to match trends to symptoms, you are well on the way to better managing the medical condition.

Other scenarios might be if you lived near a busy road or a factory, and were concerned about pollution, or even to keep an eye on an elderly relative without going for the complexity of a whole smart home. The relative could “knock knock” every now and then, and you could make sure he or she is warm enough and not skimping on the heating. Just a thought…

I can’t comment on the accuracy of the VOC and particulate figures, but the humidity and temperature measurements were very similar to the values recorded by other smart sensors. Further, the general trends appeared to be correct – people in the room, vacuuming, opening windows, cooking – all impacted as expected on the measurements, so broadly I believe the figures are correct.

The Foobot is available direct from their website priced at US$199 and EU€199. The Foobot is on Amazon.co.uk too for GB£179.

Thanks to Foobot for supplying the unit for review. There’s an unboxing and review video below.

One thought on “How Good Is Your Air? Foobot Knows”