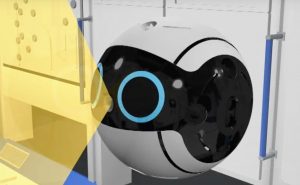 If you’re like me, you were probably hoping that the first news about a Japanese space robot would come complete with footage of a giant humanoid mecha that shoots laser beams from its eyes. Unfortunately, that day hasn’t yet arrived. But the first stepping stone to an intergalactic robot army might just be here in the adorable form of Japan’s new ball-shaped space drone.

The drone, known as Int-Ball (sorry, Japan, but Tranzor Z would’ve been a way cooler name), was designed by the Japanese Aerospace Exploration Agency (JAXA) to monitor the activities of astronauts on the International Space Station. Int-Ball is controlled by ground crews, who can use the drone’s camera to get a better view of astronauts as they work on daily tasks.

At first pass, it might seem like Int-Ball was created to spy on astronauts and make sure they aren’t slacking off on the job. But it turns out astronauts spend a lot of time using cameras to document their work. Int-Ball removes the need for astronauts to do this, and it’s estimated that the drone could give astronauts a 10% productivity bump. These types of improvements are welcome in an environment like the space station, where maximizing mission time is crucial.