Here on my desk I have an Optoma ML750ST LED projector. It’s a small short throw personal projector just 113 x 123 x 57 mm which makes it about the same size of a stack of CDs. Despite the diminutive form factor, the ML750 still comes with a good complement of ports and a couple of tricks. Let’s take a look. 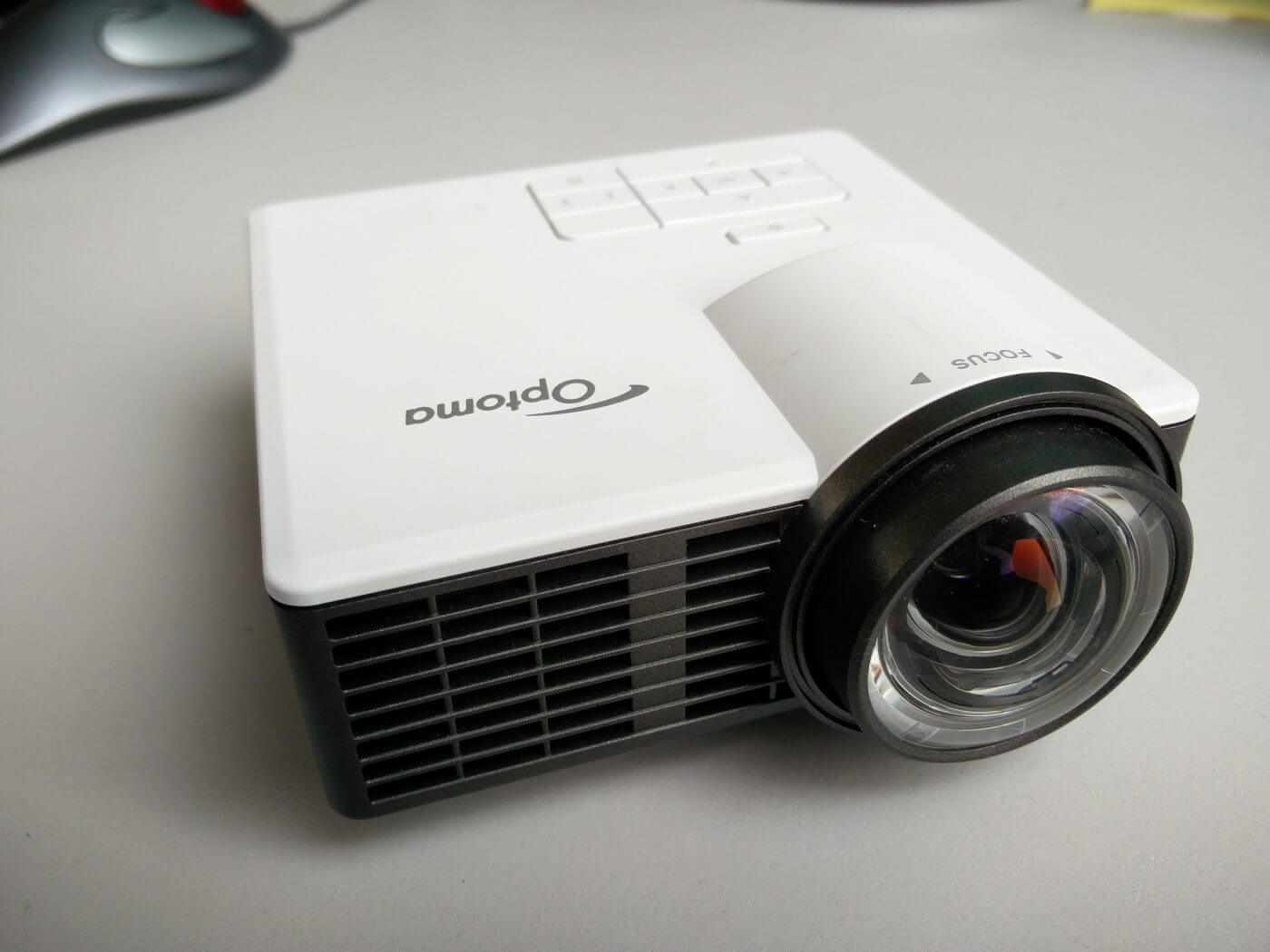 White on the top and dark grey round the sides, the most noticeable feature of the Optoma projector is the disproportionately large lens on the front. It’s needed for the short-throw, which projects a large image from a short distance from the screen. Minimum distance is only 43 cm with a max around 3.5 m. At full distance, the image is around 5 m wide. 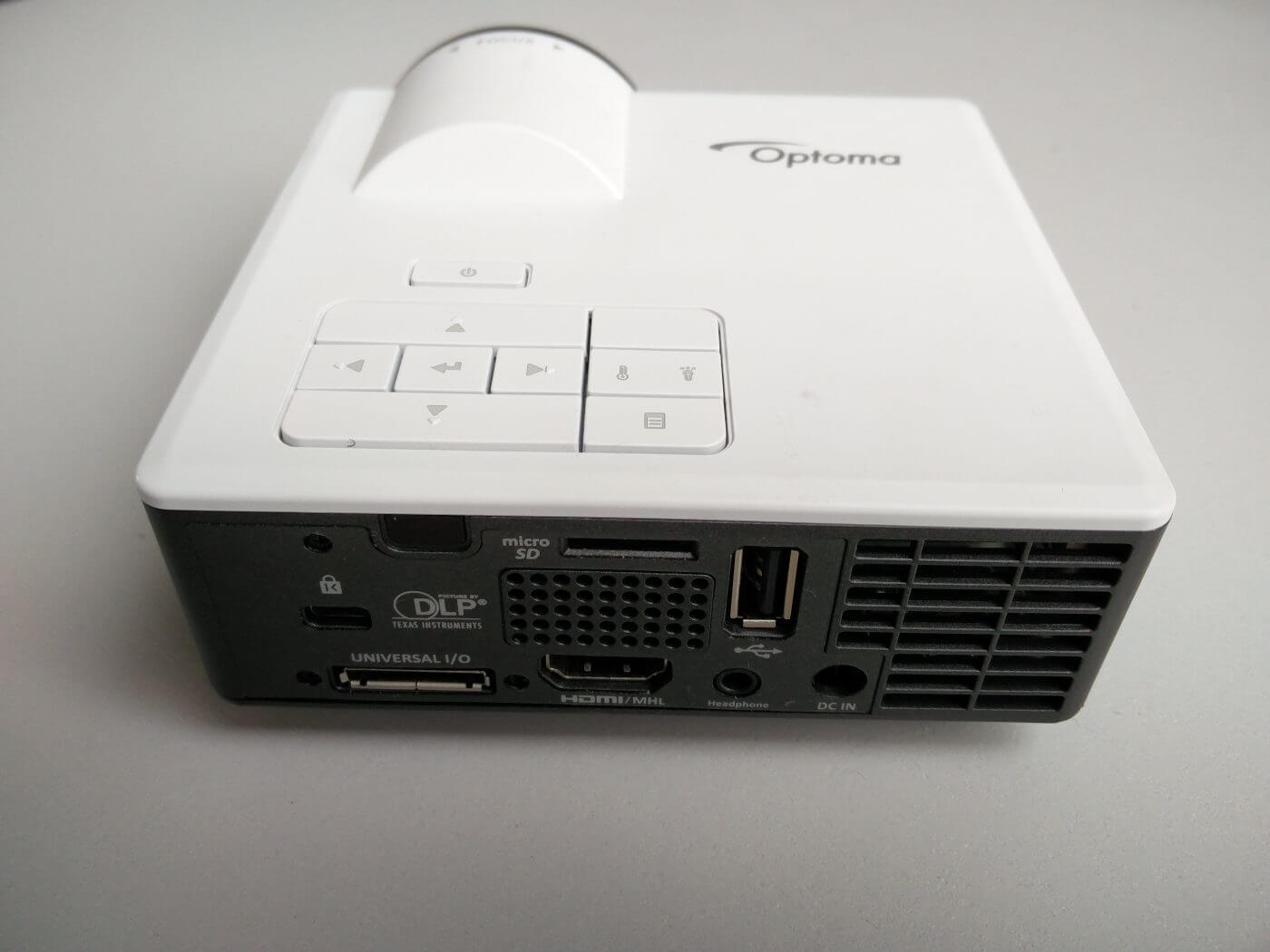 There’s a set of buttons on the top of the projector for turning it on, adjusting the image and selecting media (more on this later) but the main area of interest is round the back with a selection of connectors, ports and sockets, including HDMI and Universal I/O for VGA. The projector can read directly from media too and there are microSD and USB ports for data. A 3.5 mm stereo jack, power socket, IR receiver and Kensington lock round out the rear. Power is supplied via an external power supply, which keeps the size and weight down. There’s small remote control too. 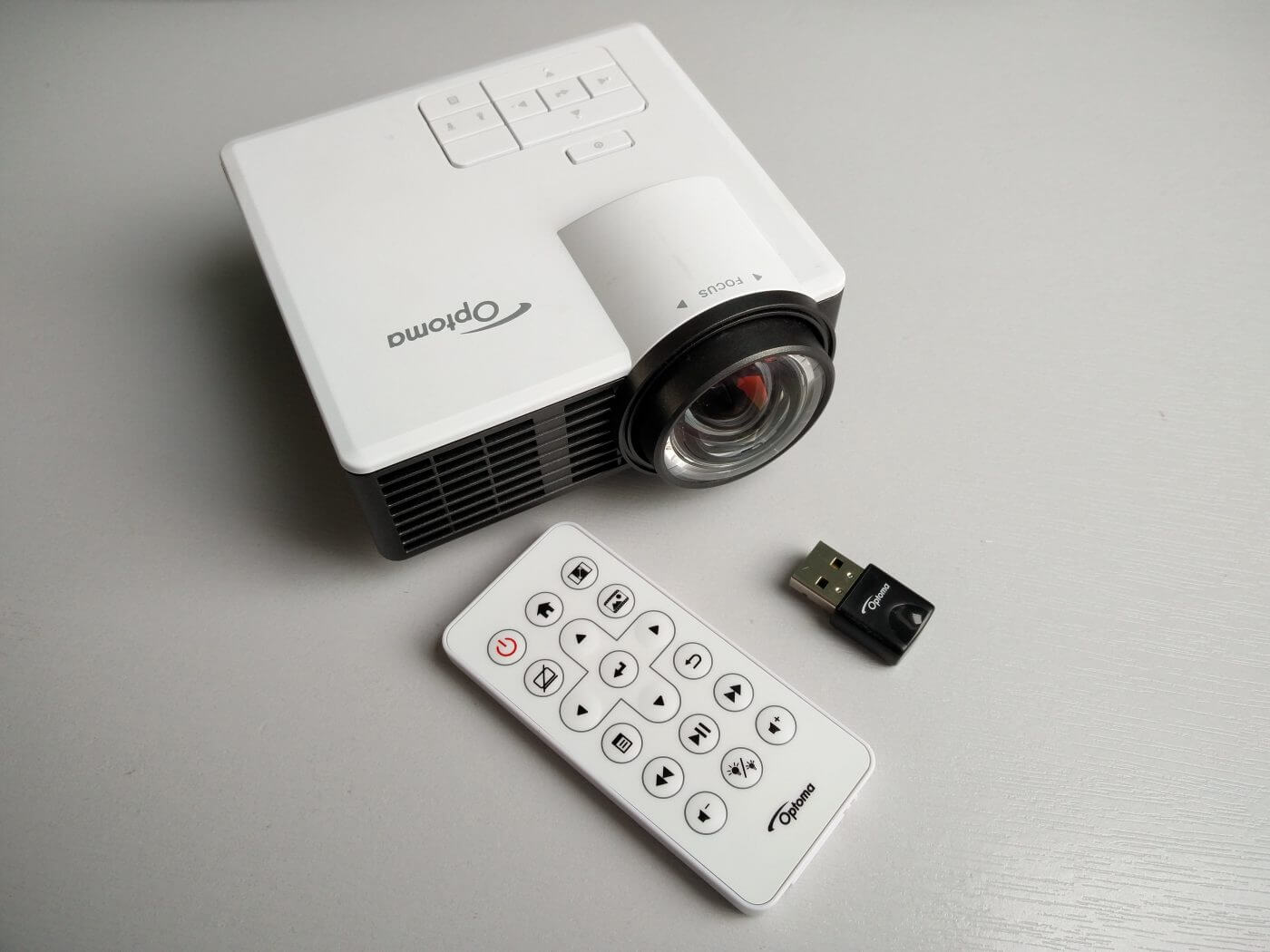 On the bottom are three rubber feet and a camera screw mount. The foot at the front spins out to about a 1 cm to raise the projection up, and obviously the screw mount can be used with a tripod or ceiling mount. The large lens rotates smoothly through about 45 degrees to focus the image.

Connect up the ML750 to a PC or laptop and it appears as a WXGA (1280×800) monitor, and with a suitable OS you can do the usual tricks of either reproducing the current desktop or extending the desktop to the ML750’s display. The projector will lock onto the video signal and it sometimes took a second or two to pick up the VGA or HDMI. One of the benefits of an HDMI connector is that a media streaming stick like the Roku or Amazon Fire TV can be plugged straight in. 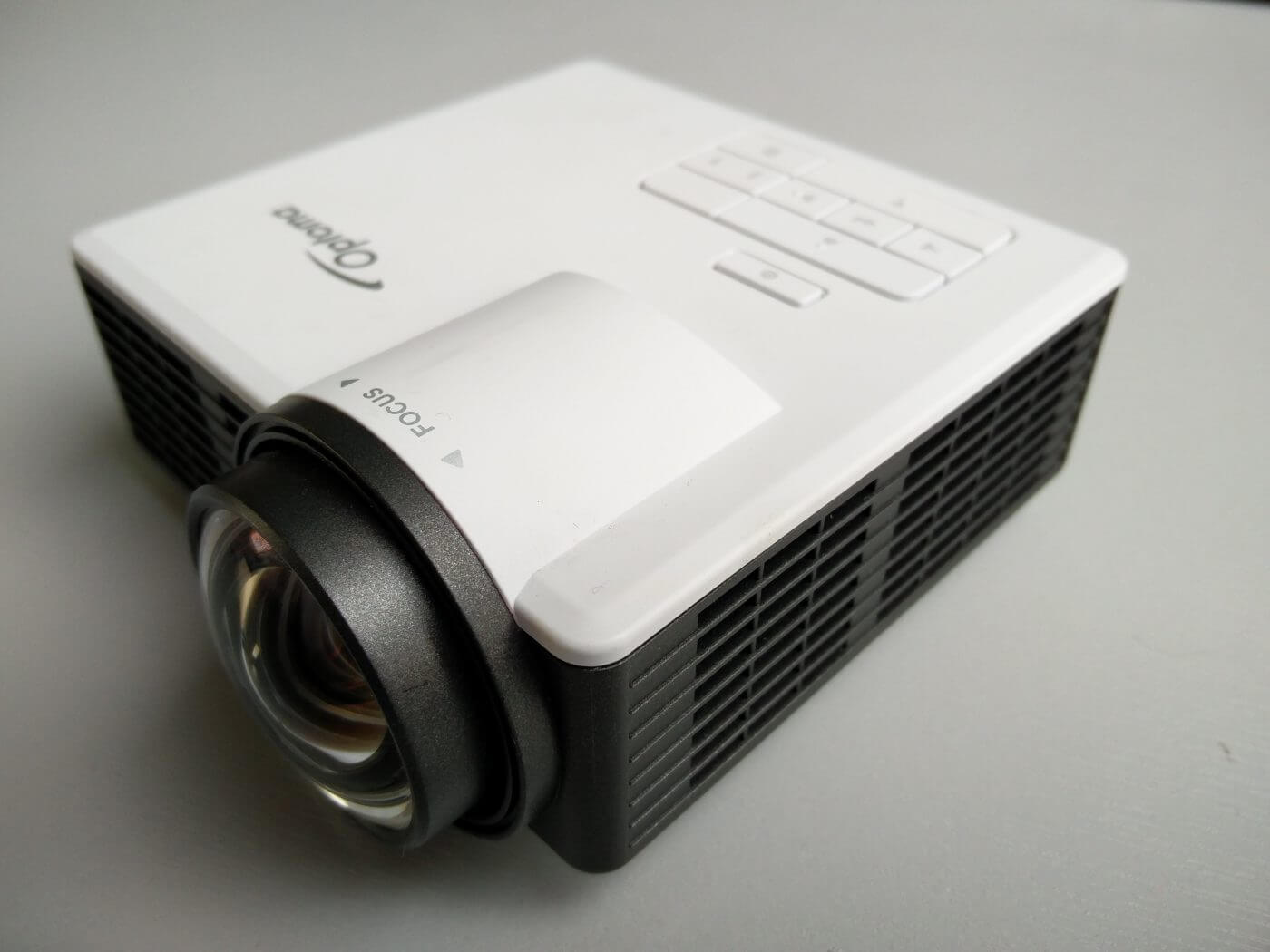 The ML750 does have a few other tricks up its sleeve (or USB port as the case may be). First of all, the projector has a built-in media player and Ms Office document viewer that will show films, play music and display Word, Excel, Powerpoint and PDF files directly from either a microsSD card or USB memory stick. Most documents that I tried worked fine, but some Powerpoint animations didn’t quite work as expected – to be fair, this is noted on Optoma’s website. The on-screen controls have big friendly icons in a subtle purplish hue.

If entertainment is more your bag, movies played well. Just for kicks, I connected up my new Sky Q and watched a couple of movies – it was all good fun with some big screen films. In a slightly darkened room, the picture was wasn’t bad – colours were good. The ML750ST puts out 800 lumens, according to the spec, whereas a powerful projector is 3000 lumens, so it’s not going to produce a bright image in a well-lit room.  Bring the lights down and it’s fine. Sound from the built-in speaker was rubbish (what do you expect?) so take a feed from the source through a hifi or plug in some external speakers. 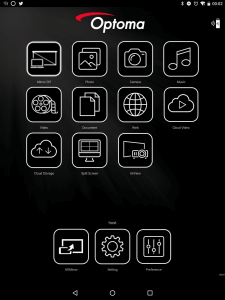 Next on the list of clever things is the USB WiFi dongle which plugs into the back of the ML750. Once connected to the “HDCastPro_XXXX” wireless network, you can use the complementary HDCast Pro app on your smartphone or tablet to play presentations and display media. You can zoom in and out of photos and documents, and the refresh is pretty snappy, though not quite instantaneous. It’s a handy feature and definitely much more relevant these days with the increasing use of tablets. The only downside is that while connected to the projector via WiFi, the tablet isn’t connected to the Internet…but Optoma’s thought of this, and with a little extra configuration the projector can be directly connected to the local WiFi network. The HDCast Pro app still works in the same way but now the smartphone or tablet is connected to the main wireless network and there’s normal connectivity.

Finally, Optoma have this really nifty software suite for projection mapping which helps create two dimensional visual displays, almost works of art. It’s quite clever but takes a good amount of work to do well. My efforts were a bit feeble so I’ll point you in the direction of Optoma’s website for now. I’m going to keep tinkering and once I have something half-decent I’ll bring it back to GNC.

Overall, I’m pretty impressed by the ML750ST. I’m used to projectors about the size of the phone book and the ML750ST was able to do everything they can do and more. The ML750ST isn’t exactly an impulse buy as it’s priced at GB£529 and the USB WiFi dongle is an extra GB£30, but as business purchase, it makes a great deal of sense, especially with HDCast application for tablets and smartphones. I wouldn’t recommend it for a permanent installation in, say, a training room because a brighter projector would be more suitable, but for ad hoc presentations and portability, the ML750ST is a good choice.

The projector can be bought direct from Optoma and thanks to Optoma for the loan of the review unit.