Earbuds have evolved significantly from the wired junk that came with early smartphones to quality sound via Bluetooth and AptX codecs (and price tags to match). The apex of totally wireless earbuds has been challenging but in the last few months there have been Kickstarter campaigns and even Apple finally has their AirPods. A couple of weeks ago the team at Syllable sent me the D900 mini, a set of wireless earbuds complete with a cool charging case and blue LEDs. I’m in heaven, I thought. Let’s take a closer look… 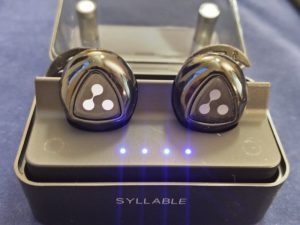 Right from the start it’s apparent that the D900 mini is well designed and cleverly made. Take the charging case. There are small pogo pins in the cradle for each earbud. Placing an earbud lightly into the case lights up the blue LEDs to indicate the battery level of the case. It’s only when you close the lid of the case onto the earbuds, pushing them down onto the pogo pins, that the earbuds recharge. The lid is kept shut with magnets. All very smart. 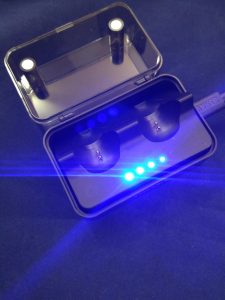 The D900 mini comes with three sizes of eartips, a microUSB charging cable and a small suede-effect pouch. As usual, I needed the largest to fit my ears. All the sizes come with retaining hooks to help stop the earbuds falling out. The D900 mini earpieces do point forward slightly too but overall I found the fit was good and I was able to wear the headphones comfortably for nearly an hour, perhaps a little less. 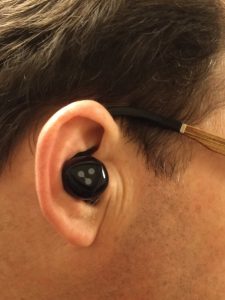 There is a little weight to them so they never quite disappear from your consciousness. While the D900 mini is bigger than the standard earbud, it’s not so much that anyone really notices. With a woolly hat on, they’re completely invisible and the hat keeps them in too. Perfect for long winter walks. Having said that, I didn’t have any problems with the earbuds falling out once I had them in properly. As ever with earbud fit, YMMV.

The earbuds have only one button and that’s effectively the whole of the top surface. Pressing this turns on the earbuds, confirmed by a few tones, and a long press on the left bud will get them into pairing mode – the left earbud is considered the master. I had no problems getting the D900s connected up. (Syllable was even spelt right this time). Once paired with my OnePlus 2, they worked as any Bluetooth headset. Obviously with only one button per ear, the controls are fairly simple. Short presses on the button stops / starts music playback and accepts calls. Long presses reject calls and turn the earbuds off.

Battery life is somewhere between 90 minutes and two hours, which seems short, but given the tiny size of each D900 mini earbud, it’s pretty good. The charging case keeps the earbuds charged up so the D900s tend to be fully charged when starting to listen to music. The charging case is supposed to recharge the earbuds from four to six times. That seems about right be I didn’t exhaustively test this as I didn’t always run the headphones flat.

In terms of audio quality, the D900 mini is as good as any wireless Bluetooth headset I’ve listened to, especially in a quiet room, with good detail, rich sound and solid base. Yes, you will notice the difference against a pair of wired Sennheisers, but for (relatively) low cost wireless headphones, the sound is really good. The D900s are supposed adjust the frequency response to emphasise the bass even at low volumes, though as an engineer, what impressed me most was that both earbuds remained in step – I never once encountered one earbud playing behind the other. Really clever stuff. 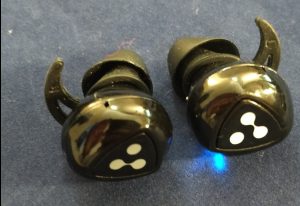 Problems? I encountered a couple of minor problems with the D900 mini. Sometimes, particularly when outside, the bass would disappear resulting in a very thin sound. I never quite figured it out but I have a suspicion that it was noise cancellation or frequency adjustment not quite behaving as intended. The other issue I encountered was that sometimes the audio would drop out between one, other or both earbuds for a few seconds. It would always come back and faded in gently rather than just exploding back in, which was a better experience. I noticed that this tended to happen at the beginning of a listening session, so I’m not sure if this was some part of frequency setting or power level calibration. To be fair these were all minor niggles.

Overall, these earbuds are astonishing especially when the price is GB£40 from Amazon.co.uk (US$50 from Amazon.com). Certainly there are a few flaws but the D900 mini is incredible considering the engineering challenges, the technology and the sound quality. If these are first gen products, I can’t wait for the next iteration.

There’s more in this unboxing video.

Thanks to Syllable for providing the D900 mini for review.