The “competitively priced” flagship smartphone market got a little hotter today with the launch of Huawei’s Honor 8 smartphone in Paris. Priced at GB£369, the Honor 8 is moving into OnePlus’ territory and whatever you prefer, it’s good news for consumers buying unlocked phones who want power and style for less. 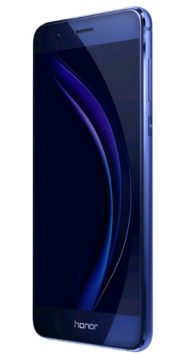 Regardless of price, the Honor 8 is one good-looking phone. It’s a glass finish and appears stunning in the sapphire blue which all the hero shots and promotional videos use. Of course, there’s a midnight black and pearl white if you prefer something plainer.

In terms of spec, the Honor 8 is an octacore HiSilicon Kirin 950 CPU with four 2.3 MHz cores and four 1.8 GHz cores, supported by 4 GB RAM, 32 GB storage and a microSD slot. The display is a 5.2″ full HD screen (1920×1080) with very slim bezels on the left and right. On the back there’s a fingerprint scanner which can unlock the Honor 8 in less than 0.4s. In addition, two SIMs can be installed if needed

The Honor 8 is powered by a 3000 mAh battery which Huawei say will deliver over a day and a half of normal use and still over a day with heavy use. There’s fast charging too which will charge to 47% in 30 minutes, though it’s not terribly clear if this is a proprietary fast charge system or not.

Cameras are impressive on paper with a twin 12MP cameras on the rear and an 8 MP camera on the front for selfies. The Honor 8 has a wide aperture mode that allows the focus to be adjusted after the picture has been taken.

Connector is USB C (but only USB 2 .0). The audio socket is retained too but the slight surprise is the inclusion of an IR blaster to control TVs and other AV. Takes me back to the days of the Palm III. Wifi comes in all the current flavours – 802.11ac/a/b/g/n, 2.4/5 GHz, and there’s also NFC.

That’s it for now – the Honor 8 product video is below and the launch event is over on Facebook. Pre-orders are being taken at vMall and there’s a voucher offer worth GB£69.99.

With luck, I’ll be getting my hands on an Honor 8 for a hands-on review, so more information then.