Microsoft and small Windows devices are in a difficult space. There’s no doubt that for serious work, a full desktop or laptop is needed, whether based on an Apple or Microsoft OS. When it comes to tablets and phones, Windows is away in the distance behind iOS and Android.

Into this place comes the Venturer 2-in-1 Mini Windows Notebooks, consisting of the BravoWin 10KT at GB£149 and the EliteWin 11KT at £199. These are hybrid devices, capable of switching between tablet and notebook mode by detaching the keyboard. The main difference between the two models is the screen size (10.1″ 1280×800 v. 11.6″ 1366×768) and here we have the little brother, the BravoWin. I’d never heard of Venturer before but they’re a Hong Kong-based outfit so let’s take a look. 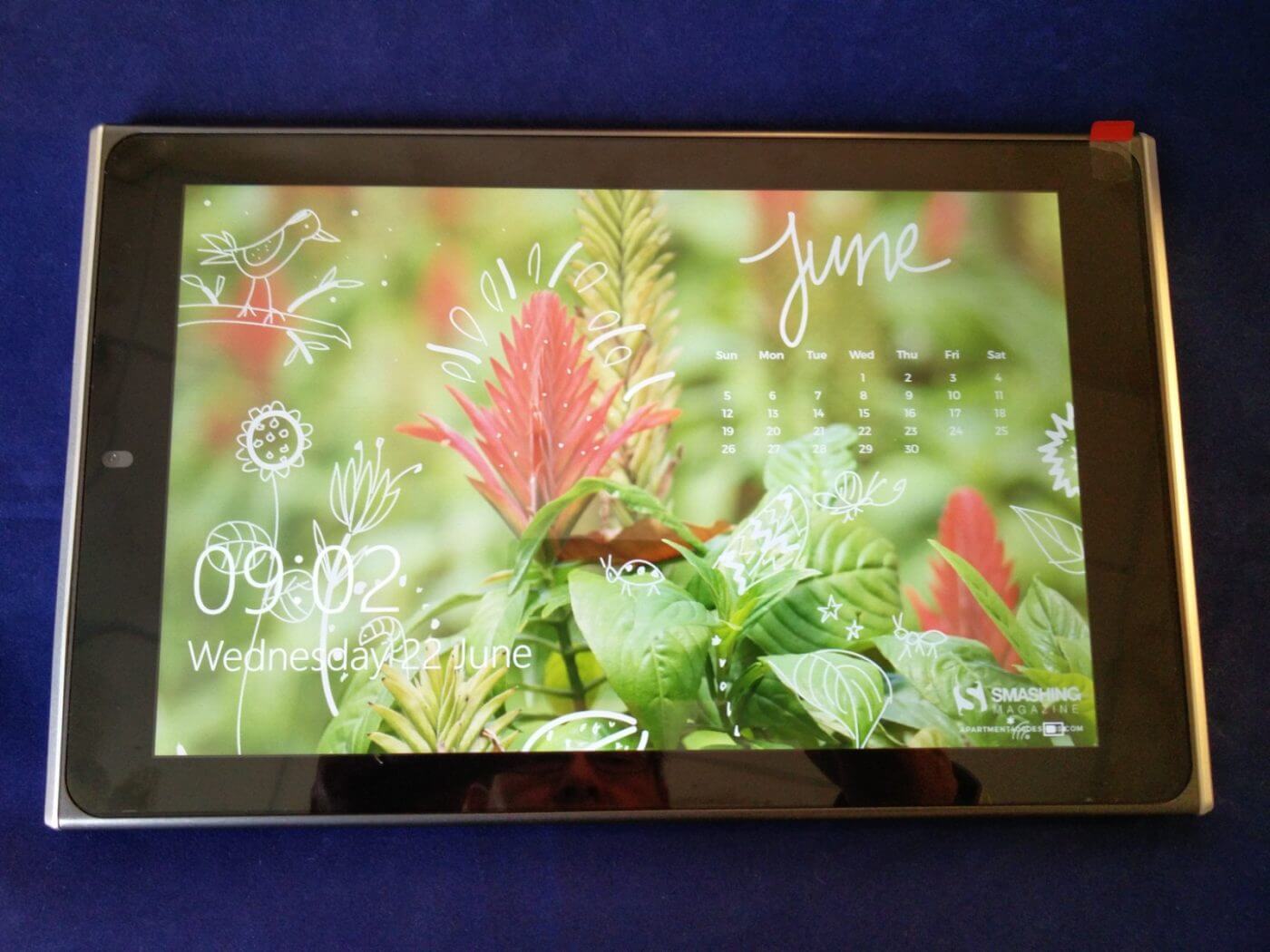 As a hybrid, the BravoWin comes in two pieces, namely the screen and the keyboard, which come together by slotting the screen into a hinge on the keyboard. The overall dimensions are roughly 26.6 cm by 16.8 cm by 2.4 cm when closed up with a bit of an air gap between the keyboard and screen, though it tapers towards the front. The tablet itself is 1 cm thick.

Opening the BravoWin as a notebook, the hinge rotates downwards to raise the rear of the keyboard up for a slight slope. A soft felt pad along the hinge protects the surface and while the keys on the keyboard are quite small, they do travel nicely. There’s a small button-less touchpad at the front too where double tapping on the left and right side of the keyboard simulates the mouse buttons. 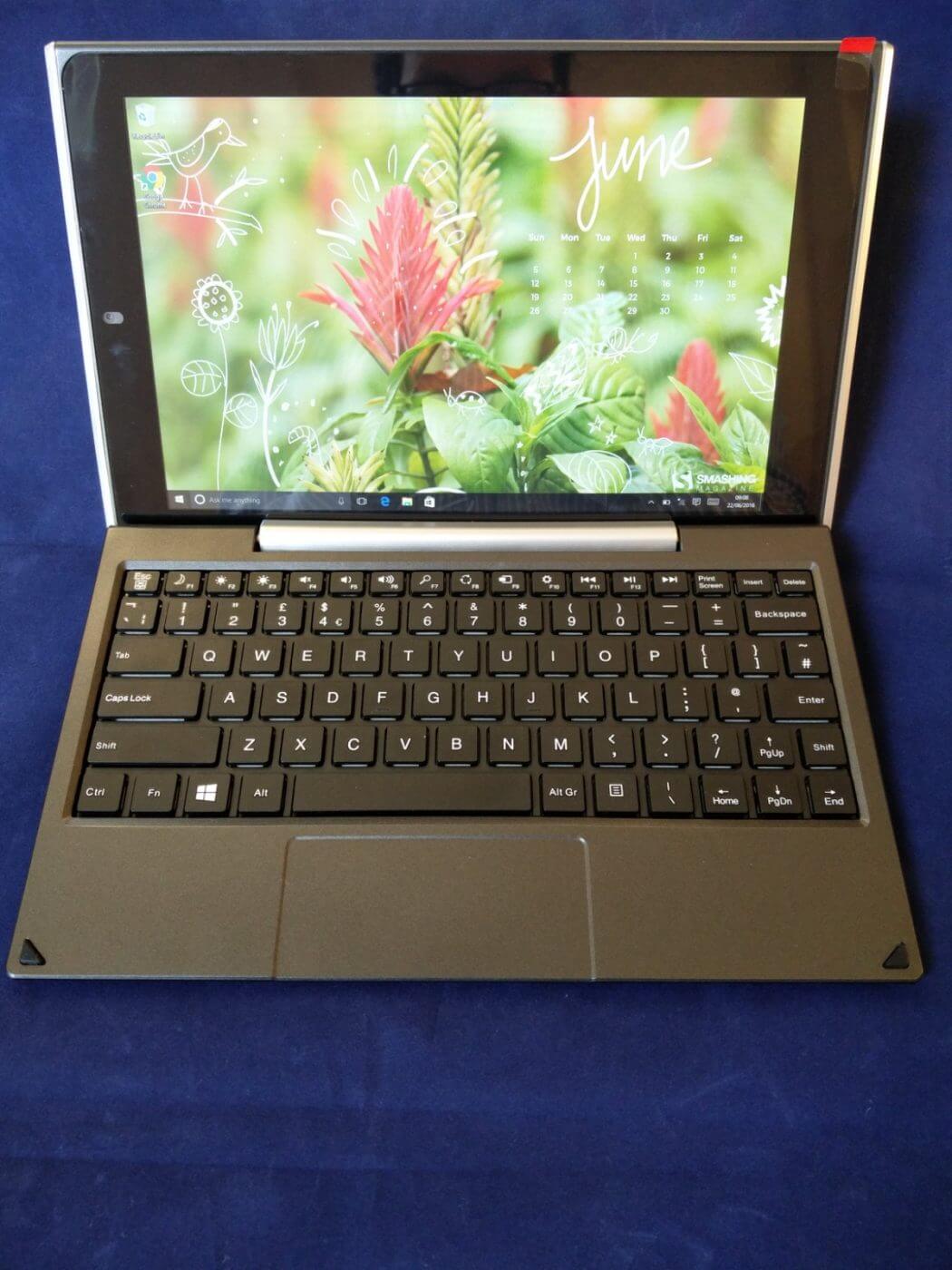 While beauty might be in the eye of the beholder, the BravoWin is no looker. It’s two tone plastic, part dark gray, part silver with buttons, speaker grilles and ports all over the place. Well, not quite everywhere; most are located on one end of the tablet. There’s an HDMI mini, micro SD slot, DC power in, micro USB port, 3.5mm earphone, power on/off button, USB 2 port and Windows button. The BravoWin can be charged both via the micro USB and the DC power in, with a PSU supplied in the box. On the back of the tablet, there’s volume up / down controls and reset button. There’s nothing on the keyboard which is a pity as an extra USB port or two would have been handy. 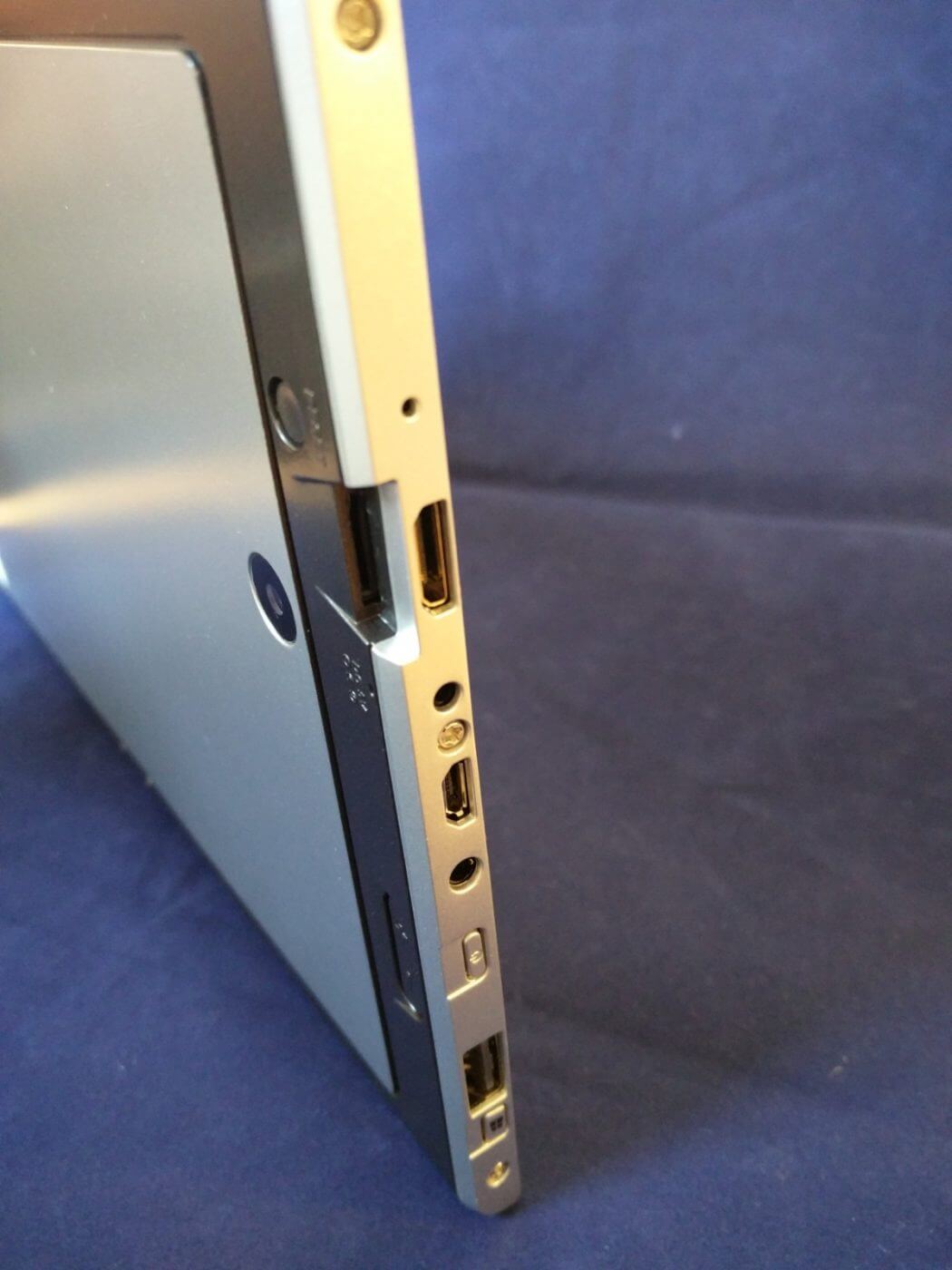 In terms of build quality, it’s a bit of a mixed bag. The keyboard and keyboard hinge seem quite sturdy. The tablet itself is plastic and it creaks a little in use. It’s not flimsy but it’s not tremendously reassuring either. Having said that, the promotional material extols the BravoWin’s drop resistance, claiming that it’ll survive a drop from 1.2 m. I didn’t test this….. 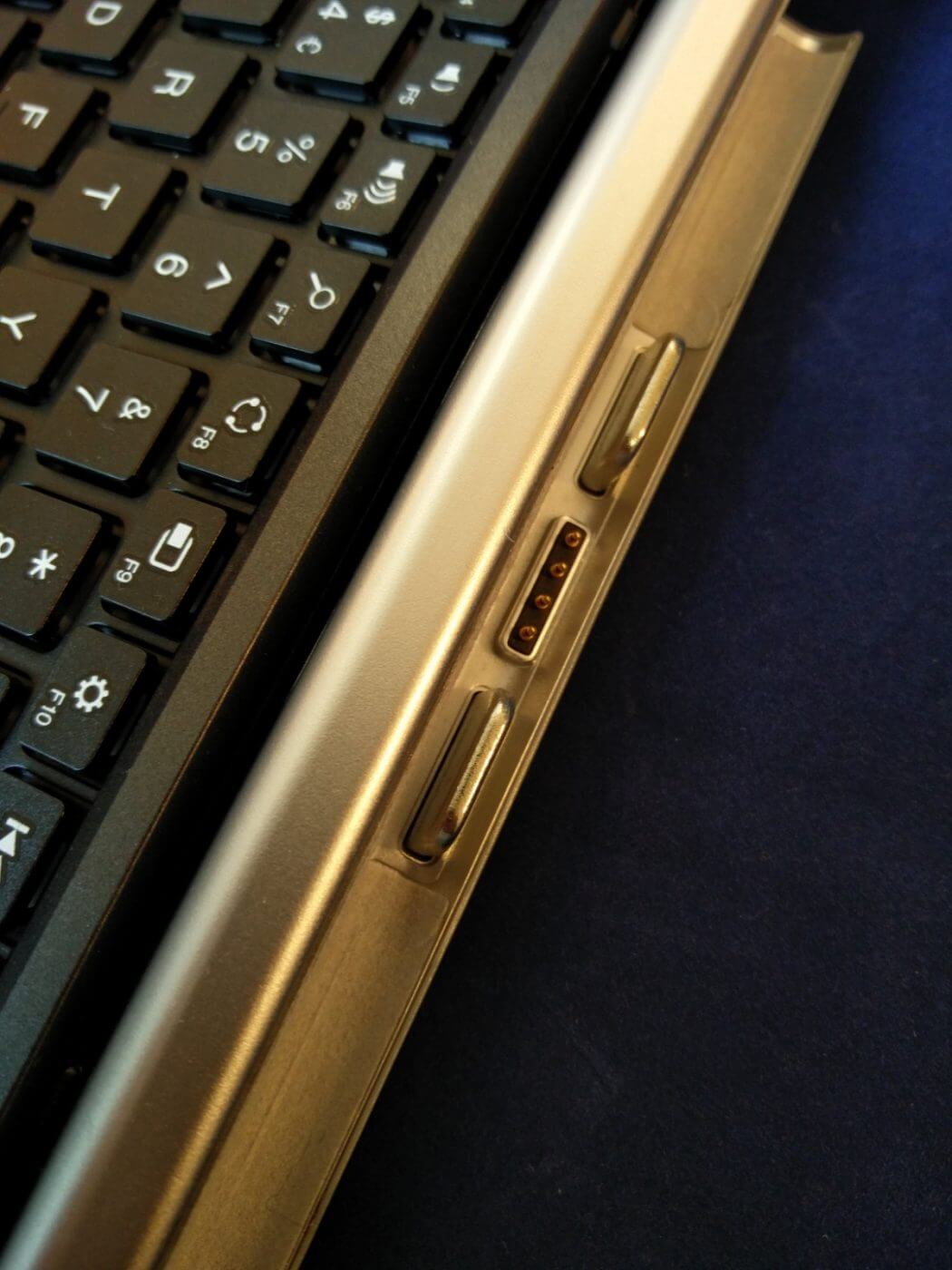 The 10.1″ 1280×800 screen is perfectly acceptable and possibly quite a bit better than some I’ve seen recently. It does suffer a little from backlight bleeding around some of the edges, but it’s most noticeable around the hinge when the notebook is booting and the screen is black. It’s not something I’d worry about in day-to-day use, though. In terms of touch, I found the screen responsive and at times, I ended up using the touchscreen more than the touchpad.

Performance is perfectly adequate for what you might call undemanding tasks – surfing the web, watching YouTube, playing Cut The Rope – and you can have a few apps open before switching apps slows it down. Obviously this depends on the apps you are using and the BravoWin is no Surface Pro 4, so adjust expectations accordingly. Regardless, I found it very usable. Battery life is rated at 8 hours and I got over six hours one day without completely exhausting the battery. 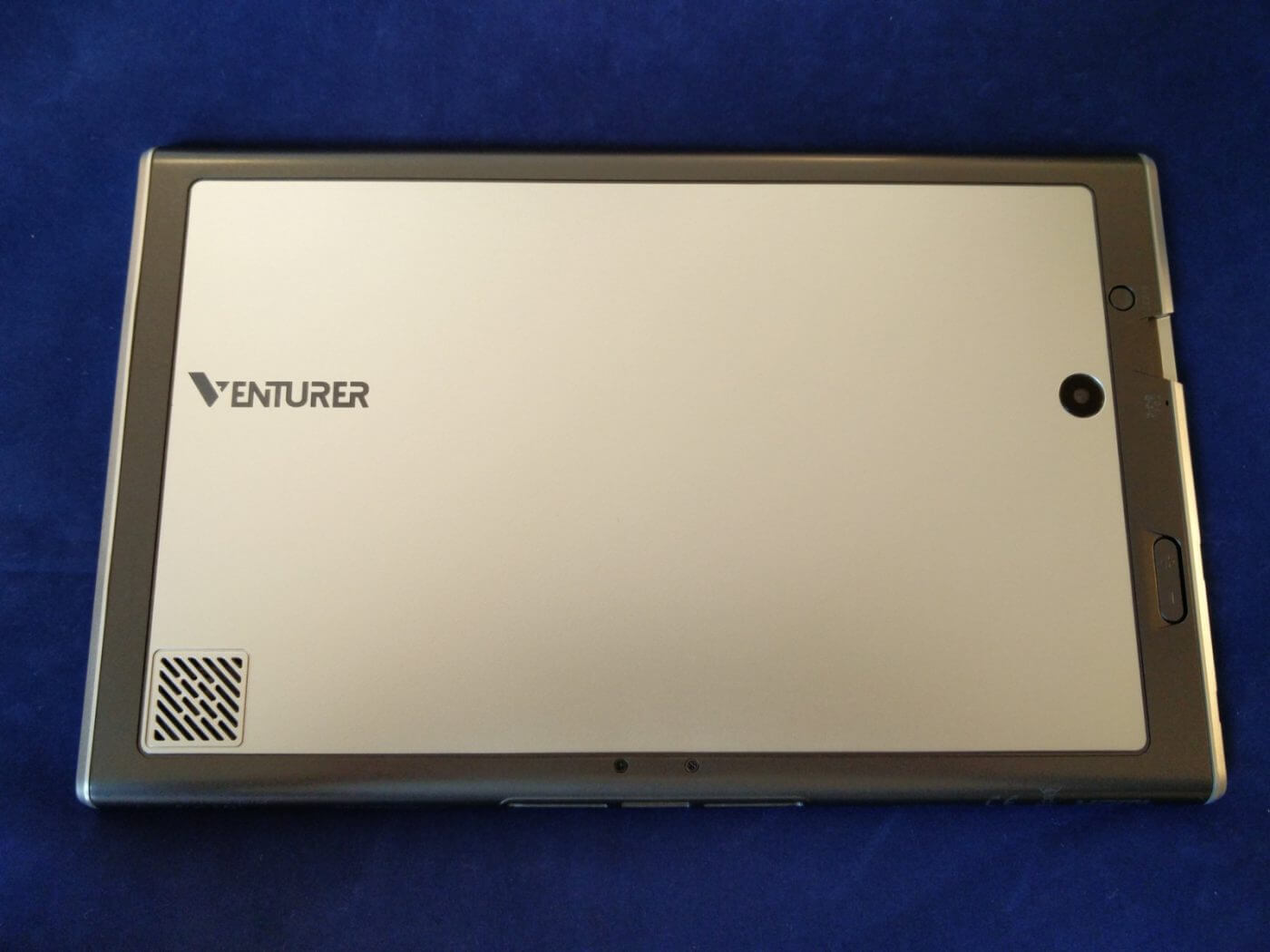 The 2 MP cameras are a bit disappointing (tablet cameras usually are) and I couldn’t get the front-facing camera to work in the standard Camera app – the app kept crashing. It did work fine in Skype so it’s not a hardware problem in itself. Cortana wasn’t very happy with the microphone either, complaining about low volume. The microphone is positioned on the end of the tablet along with the ports and wasn’t very good at picking up sound unless you were quite close to the mic.

My biggest problem though was with the keyboard and touchpad, and while this sounds like a break-up letter, the problem was me. I’m a man with big hands and I really did not get on with this keyboard. Technically it worked fine but I was constantly pressing the wrong keys, hitting the touchpad when I didn’t mean to and so on. Probably a better choice for children or people with smaller hands than mine.

The BravoWin is the first tablet I’ve used with Windows 10 and it’s certainly much better than its OS predecessors. I still get frustrated at the hybrid nature of Windows 10 at times, with it seemly unable to decide whether it’s a desktop or tablet operating system. Still, this is hardly the fault of the BravoWin so we’ll move on.

Coming to the end of the review, it’s difficult to place the Venturer BravoWin in the marketplace. It’s competing both against Windows laptops and notebooks, and against Android and Apple tablets. It’s not easy to pigeonhole the BravoWin and identify the best use cases, though the obvious ones are people who need Windows on a device strong enough to throw in a bag without worrying. Sounds like a student to me.

Let’s state this plainly: the BravoWin is a cheap small robust hybrid notebook running Microsoft Windows 10. If that’s what you need and you don’t have much cash, then take a look as it fits the bill nicely. People with large hands might want to check out the bigger EliteWin.

Both the BravoWin and the EliteWin are available from Amazon and other good retailers with an RRP of GB£149 and £199 respectively.

Thanks to Venturer for the loan of the BravoWin and if you like the wallpaper, check out Smashing Magazine’s monthly selection.