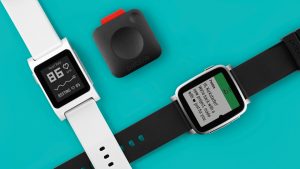 Despite the introduction of Apple Watch and the lineup of Android Wear watches, Pebble remains, somewhat at least, the darling of the market. While not the first smartwatch, it was the first to make an impact on the market.

Since the days of its debut, the company has released other models like Pebble Time, which brought a color screen and more features.

The watch maker has launched three new models on Kickstarter now. The Pebble 2 is an updated version of the original model, adding a heart rate monitor and activity tracking. It’s selling for $99.

The Pebble Time 2 “delivers the ultimate pro smartwatch with a larger, color e-paper screen and heart rate monitoring”. It will be selling for $169.

The Pebble Core isn’t a watch, but it promises phone-free fitness tracking along with GPS and music for only $69.

“Bringing delightful, affordable wearable technology to the world is the puzzle Pebble lives to solve. Our latest vision for the future is almost complete. We’re back on Kickstarter for the most important piece…You”, the company concludes.

You can find all three devices here.