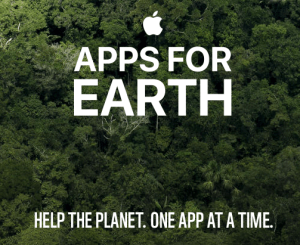 Apple and the World Wide Fund for Nature (WWF) are working together to help protect life on our planet. They created a global Apps for Earth campaign. There does not appear to be an Android version of this project.

From now through April 24, WWF will receive 100% of the proceeds from participating apps in the App Store via both the purchases of any paid apps and the In-App Purchases created exclusively for the campaign.

There are a total of 27 participating apps that feature new content celebrating WWF’s global conservation work in key focus areas: forests, oceans, fresh water, wildlife, and food and climate. The WWF app is participating with brand new content. For a limited time, you can support WWF by purchasing the Earth Story in the WWF Together app.

There is a link on the Apps for Earth page that will take you directly to the Apps for Earth section of the App Store. One of them is the Hearthstone: Heroes of Warcraft app, which is currently offering an in-app purchase of the exclusive mage Khadgar. This is a portrait that replaces the “default” mage portrait in the game.

Some other gaming apps include:
* Angry Birds 2

* Jurassic World: The Game – Adds legendary dinosaurs, eco-buildings, and other items to your prehistoric theme park

* Star Wars: Galaxy of Heroes – Battle the Empire in a new event set in the lush forests of Endor. Plus, get Ewok bundles that include crystals, credits, and more.

There are also several apps that are not gaming related. One of them is Recolor – Coloring book for Adults. It offers a new gallery that features pictures from WWF focus areas, including wildlife, climate, and more.