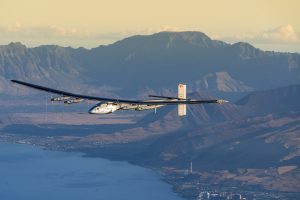 Solar Impulse, billed as “the world’s first around-the-world solar flight,” has been grounded in Hawaii since last year. The experimental plane landed in Hawaii as part of its planned journey to circumnavigate the planet. But along the way, Solar Impulse’s batteries sustained damage due to overheating. This led to downtime as the project’s engineers repaired the problem. Now, Solar Impulse is ready to take to the skies again to complete its journey, flying east over North America, the Atlantic Ocean, Europe (or Northern Africa), and finally landing in Abu Dabhi, where the flight originated.

Solar Impulse was fortunate to find a shelter to protect its airplane during the winter on Kalaeloa airport, thanks to the University of Hawaii, Honolulu Community College, and the Department of Transportation. The polar Impulse steam also received valuable support from many people and institutions, such as the Governor of Hawaii, the authorities of Kalaeloa and Honolulu airports, and the Swiss Consulate (Solar Impulse was founded by Swiss engineers Bertrand Piccard and André Borschberg).

Between late February and mid-April 2016, Solar Impulse accomplished a total of 13 flights. Maintenance flights, carried out by Solar Impulse’s test pilot, confirmed good performance of the aircraft and proper functioning of a newly integrated cooling system, installed to safeguard the batteries from temperature-related glitches. They were followed by a series of training flights completed by both pilots: André Borschberg and Bertrand Piccard, including a high altitude flight, in order to prepare for the remainder of the Pacific crossing.

When the weather is right, Solar Impulse will resume its round-the-world solar flight and take off for North America with Bertrand Piccard at the controls. The team is examining four potential destinations: Phoenix, the San Francisco area, Los Angeles and Vancouver. Based on what was learned in 2015, the decision was made to expand the range of potential destinations to leave a maximum flexibility for route planning. The final landing place will be chosen a couple of days before departure depending on the weather conditions. The mission will then continue onward to New York, Europe or Northern Africa and Abu Dhabi where it all started.