If you are heading to the Gadget Show Live in Birmingham, England this weekend then you are in for a treat. This is the fourth time that I’ve been and I think it’s the one of the best. Loads of stands, loads of activities, loads of gadgets. Busy for sure and I racked up over 15,000 steps in the pursuit of interviews, which I’ll be publishing over the next few weeks. 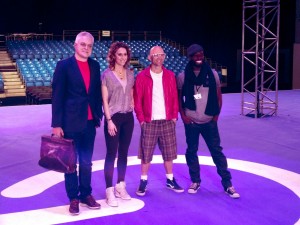 At the press call, I was lucky enough to chat with the presenters  Jon Bentley and Ortis Deeley and I recorded an interview with Jason Bradbury and Amy Williams, though I wasn’t asking the questions (Birmingham Post?) and there’s a bit of background noise as they were still setting up the stage for the theatre event. 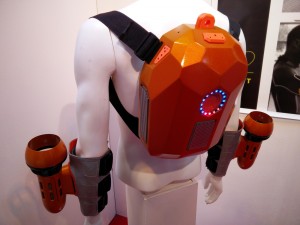 Looking round, the key trends were personal electric vehicles with plenty of hoverboards, bikes and scooters; smart homes with offerings from Hive, Fibaro, Smanos and Samsung; and of course, drones.

The Gadget Show Live supports the British Inventors Project and it was great to see so many new and genuinely innovative ideas: I’ll be covering these in subsequent posts. Here’s one of the inventors, Supermarinovation and their underwater jet pack. 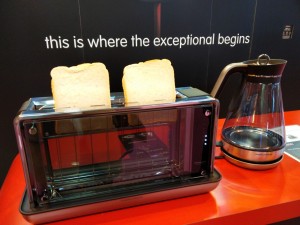 Slightly surprisingly, the gadget of the show for me was a kitchen appliance. Morphy Richards have developed a glass heating element (Thermoglass) which gets very hot and have used the material to create transparent products including an iron and a toaster. Now you can see how brown your toast is in the morning!