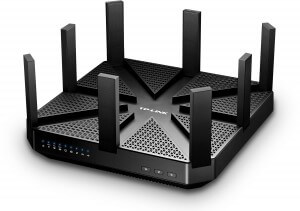 One thing that can be counted on in the world of technology is progress. Yes, everything in the world moves forward, but some is faster than others and this field is one of them, advancing at a seemingly exponential rate.

Just when you thought you’d seen the fastest routers one comes along that will blow the doors off of it in terms of speed.

That honor currently belongs to TP-Link who has announced an 802.11ad router. Yes, that’s faster than the ac standard recently being promoted.

“Qualcomm is continually investing in new, innovative technologies to meet the increasing bandwidth demands resulting from overcrowded networks”, says Rahul Patel, senior vice president and general manager, connectivity, Qualcomm Technologies, Inc.  “We are leading the way with 802.11ac wave 2 with MU-MIMO to improve efficiency in the 2.4/5 GHz bands and now once again are bringing groundbreaking 802.11ad technology to commercial fruition. These technologies combined with the unique features of TP-LINK’s Talon AD7200 Multi-band Wi-Fi Router are designed to improve wireless networking and user experience”.

It will be available early this year, but a price was not announced.