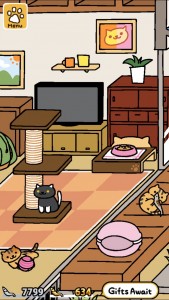 Neko Atsume: Kitty Collector is an adorable game where players collect cats. The incredibly cute artwork caught my attention right away. A recent update allows players to toggle between Japanese and English in the game.

The adorable artwork was what first attracted me to this game. All of the text in the game was written in Japanese, and this left me guessing about how to navigate through the menus and what the different items were called. Although most of the game is fairly intuitive, there were times when I needed to search online for an explanation about things. 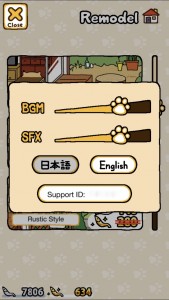 The recent update of Neko Atsume: Kitty Collector allows players who use iOS devices to toggle between Japanese and English. Suddenly, I could read the names of the gifts that some of the cats have given me. I discovered that some of the mats were actually heating pads. Some of the item descriptions are amusing. At this time, the update that enabled English is only available on iOS.

This cute collector game is extremely simple to play. Fill the food dish and put some toys, beds, or other items into the space. Random cats will come and visit (until the food runs out). Check in periodically and you might find a cat taking a nap or playing with a toy that you left out for them. If the food runs out, you won’t get any more cats until you fill the dish again. Unlike other pet related games, the cats don’t die if the food runs out. (They just stop visiting you for a while).

The overall goal seems to be encourage all of the different cats to visit. There is an album that shows players information about the different cats that have appeared, and the kinds of things they like to play with. Some cats will decide to become your friend and bring you a special gift.

Cats that visit will “pay” you in fish. Those that were especially happy will “pay” you with golden sardines. These are the two currencies in the game. Eventually, you will collect enough to buy more stuff for your cats to use. This game is appropriate for kids to play, and they can use the in-game currency to shop in the store for more stuff. Parents should be aware that the purchase of additional golden sardines costs real-world money.