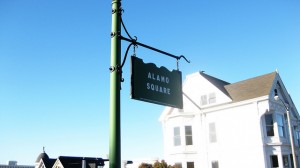 San Francisco is often described as an “interesting” place. For decades, it was home to hippies, beatniks, and other counter-culture holdouts. In more recent times, the City By The Bay has seen an influx of tech-industry workers, causing the city to gentrify at a rapid pace.

It’s hard to say if a recent set of “No-Tech” signs around San Francisco’s Alamo Square were posted by merry pranksters, social commentators, or just some people who’d like everyone to stop looking at their iPhones for a minute. Earlier this week, these signs that depict a tablet/smartphone surrounded by a familiar circle-slash popped up around Alamo Park. The signs command, “No cell phones, tablets, laptops or smart devices are permitted,” and warn that violating this edict could result in a $300 fine. They’re very official looking but the signs weren’t placed there by the city.

So far, no one has come forward to claim ownership of the signs. And despite their rather sturdy-looking installations, the signs have already been taken down.