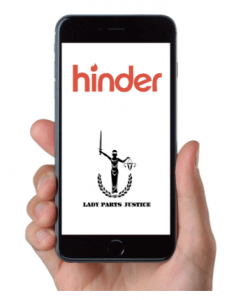 Hinder is an app that was created by Lizz Winstead. As you might know, she is a co-creator of the Daily Show. She’s also a writer, producer, comic, and part of Lady Parts Justice, which is a group of comedians who use comedy and satire to bring attention to legislation regarding women’s access to birth control and abortion.

The Hinder app could be described as a form of political satire. It functions similarly to Tinder, but instead of showing you people whom you might want to date, it shows you politicians. You can see a photo of the politician and a quote that he or she actually said about women, women’s health care, and issues relating to equality.

In addition to a photo and a quote, Hinder gives you more information about the politician who is on the screen. If you think that politician is a horrible person, and you want to warn your friends about him or her, you can. Swipe left, and Hinder will let you share that information with your friends on Facebook or Twitter.

Like Tinder, Hinder can show you politicians who are “in your area”. Pick the state that you live in, and you can see politicians, (and judges) from that state.

Hinder is an iOS app. Earlier today, Huffington Post reported that Apple had blocked Hinder from the iTunes store. Apple felt that the content violated Rule 14 of its app review guidelines, which bans apps that are “defamatory, offensive, mean-spirited, or likely to place the targeted individual or group in harms way.” This rule is lifted for “professional political satirists and humorists”.

Clearly, Lizz Winstead fits that description. There was a social media push to convince Apple to reconsider. Within nine hours, Apple chose to approve Hinder. You can get the app from iTunes or the Lady Parts Justice website.

Hinder app approved! Thanks to the many @LadyPJustice supporters especially comrades @UltraViolet who always have justice's back #LPJHinder

2 thoughts on “Apple has Approved the Hinder App”