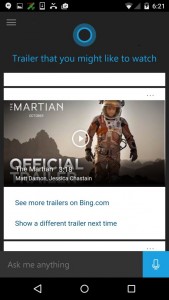 Apple has Siri, Google has, well…Ok Google — a less clever name, but it works well enough. Then there’s Microsoft, which has Cortana. It began life on Windows Phone, but then it spread to the new Windows 10. Now it spreads further, expanding on Google territory with a beta version for Android phones and tablets.

So which service do you want to use? I installed Cortana on an LG G4 and it worked flawlessly, though it requires a bit of setup. It will ask a series of questions, though they are easy to answer.

Microsoft claims “The Cortana app can do most of the things Cortana does on your PC or on a Windows phone. With the app, you can manage your hectic lifestyle by setting and getting reminders, searching the web on-the-go, tracking important information such as flight details as well as starting and completing tasks across all of your devices”.

This open beta also improves on the closed one that previously existed. You can now set Cortana as your destination when you press the Home button.

“You will also see a few differences between what Cortana can do today in her “native” environment (Windows) and in the app on Android. For example toggling settings, opening apps or invoking Cortana hands-free by saying “Hey Cortana” are only available on Windows for now. As with all betas, we are continually improving the experience and will incorporate feedback along the way”, Microsoft claims.

You can grab the app here. It’s not compatible with all devices, though, so pay attention.