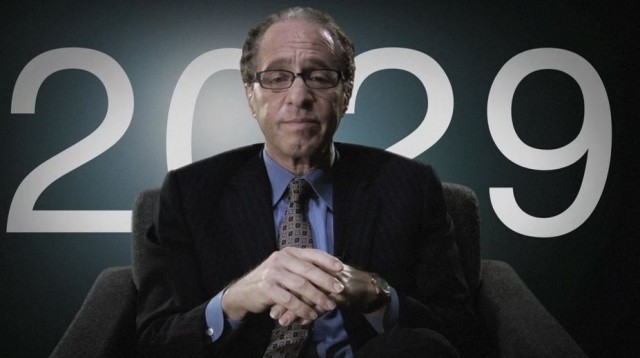 Ray Kurzweil has a pretty good track record when it comes to predicting where tech is going. In the past he predicted a computer would defeat a chess champion, that computers would be online wirelessly, and voice commands to computers, among many others.

Here are a few he has for the next 25 years:
By the late 2010s, glasses will beam images directly onto the retina. Ten terabytes of computing power (roughly the same as the human brain) will cost about $1,000.

By the 2020s, most diseases will go away as nanobots become smarter than current medical technology. Normal human eating can be replaced by nanosystems. The Turing test begins to be passable. Self-driving cars begin to take over the roads, and people won’t be allowed to drive on highways.

By the 2030s, virtual reality will begin to feel 100% real. We will be able to upload our mind/consciousness by the end of the decade.

By 2045, we will multiply our intelligence a billionfold by linking wirelessly from our neocortex to a synthetic neocortex in the cloud.

Still no word on those hoverboards though. Damn.