Back in February 2014, I reviewed the Kindle Fire HDX 8.9 and I was impressed with Amazon’s top-of-the range tablet. Amazon has continued to push their Fire tablet range and the fourth generation of the Fire tablets came out in September 2014. Not only did Amazon bump the spec with the refresh, they bumped the Kindle moniker too, reserving that for the ereaders. On review here, is the Fire HD 7 tablet, Amazon’s offering in the 7″ market. Let’s take a look. 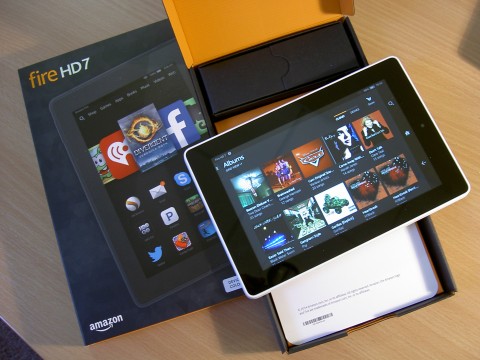 In the box there’s the tablet, a travel charger and a USB charging cable. This review unit (courtesy of Amazon) came with a US charger but I imagine that chargers will be supplied according to local requirements.

From the very start the Fire HD 7 is a little bit different from the average tablet with a choice of five different colours – black, white, cobalt, magenta and citron – and obviously this is the white version. I think it would be fair to call the Fire HD 7 as chunky – it’s a little over a 1 cm thick and weighs in at 337g, which specs it very closely to the Nexus 7 2012 but it looks a bit bigger – there’s a bit of trickery going on in that Google devices have narrow chrome bands with curved backs which make them look thinner than they are. Setting the figures to one side, the HD7 feels….fun. 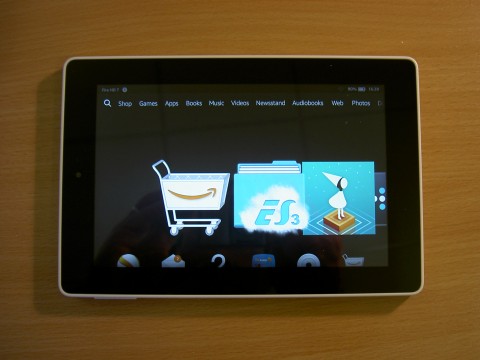 Giving the HD 7 a once over, there’s not much to poke at. The front has the main screen and a front-facing camera, on the top side there’s the power button, micro-USB port and the headphone port, and on the left there’s a volume rocker. Round the back, there’s the rear camera and stereo speakers. The rear camera is 2 MP and the front camera is VGA, which seems a bit under-specced for a 2014 tablet but it does record HD video. There’s also a large Amazon logo emblazoned in the middle of the back and not everyone will like the plastic back, though it’s largely a matter of personal taste. Even though the back cover does have a matte texture, it’s not that grippy, so I’d be investing in some kind of case. 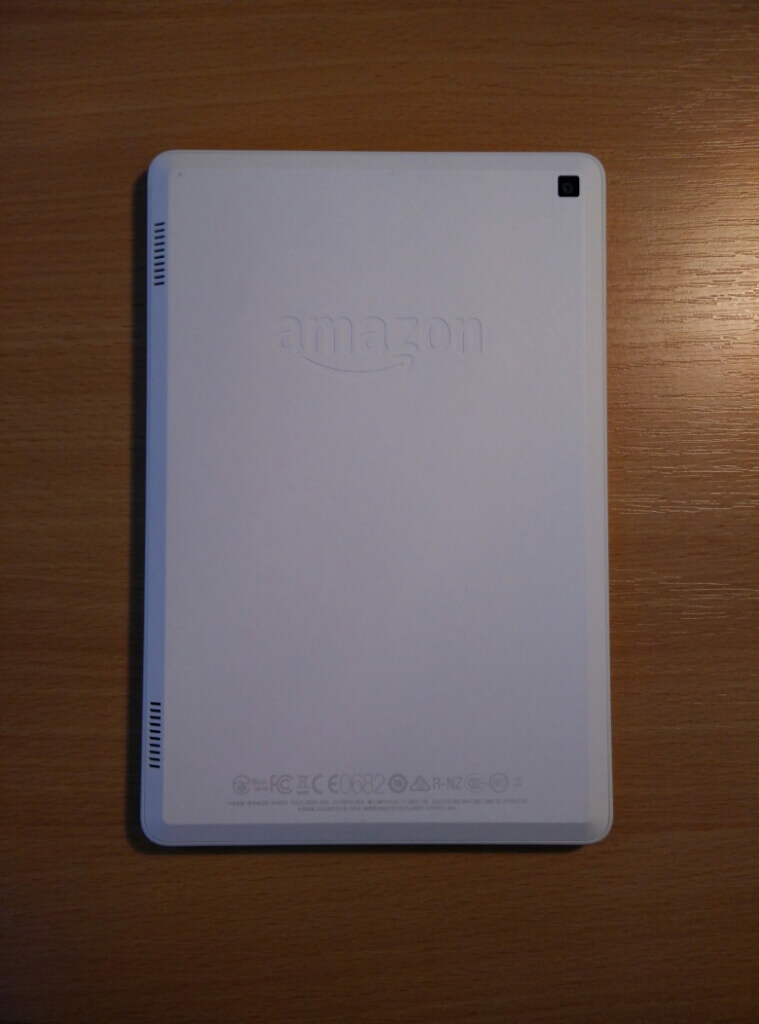 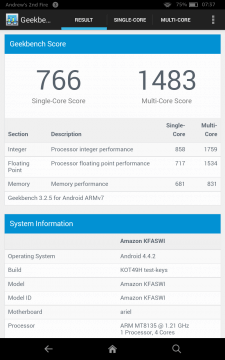 Performance-wise, the Fire HD 7 has a 1.5 GHz quad-core processor, with two 1.5 GHz cores and two 1.2 GHz cores. As a result, it scores 766 in single core and 1483 for multicore in Geek Bench 3, putting its performance close to the 2013 Nexus 7 (and much better than the 2012 one). Regardless of what the benchmarks say, the HD 7’s performance in the hand was great.

On powering up, Fire OS looks as good as ever, even on the 7″ display. The screen is 1280 x 800 pixels, giving 216 ppi, which might not be as detailed as some, but the display is good and bright with rich colours that aren’t over-saturated. The carousel style interface works well with apps and media all mixed in together. As before, there are some great touches to the interface with the soft buttons moved to the right-hand side, conveniently under the hand in landscape view but still at the bottom when held in portrait. It’s tempting to review Fire OS but given this is the fourth generation of the tablet, it’s probably unnecessary. 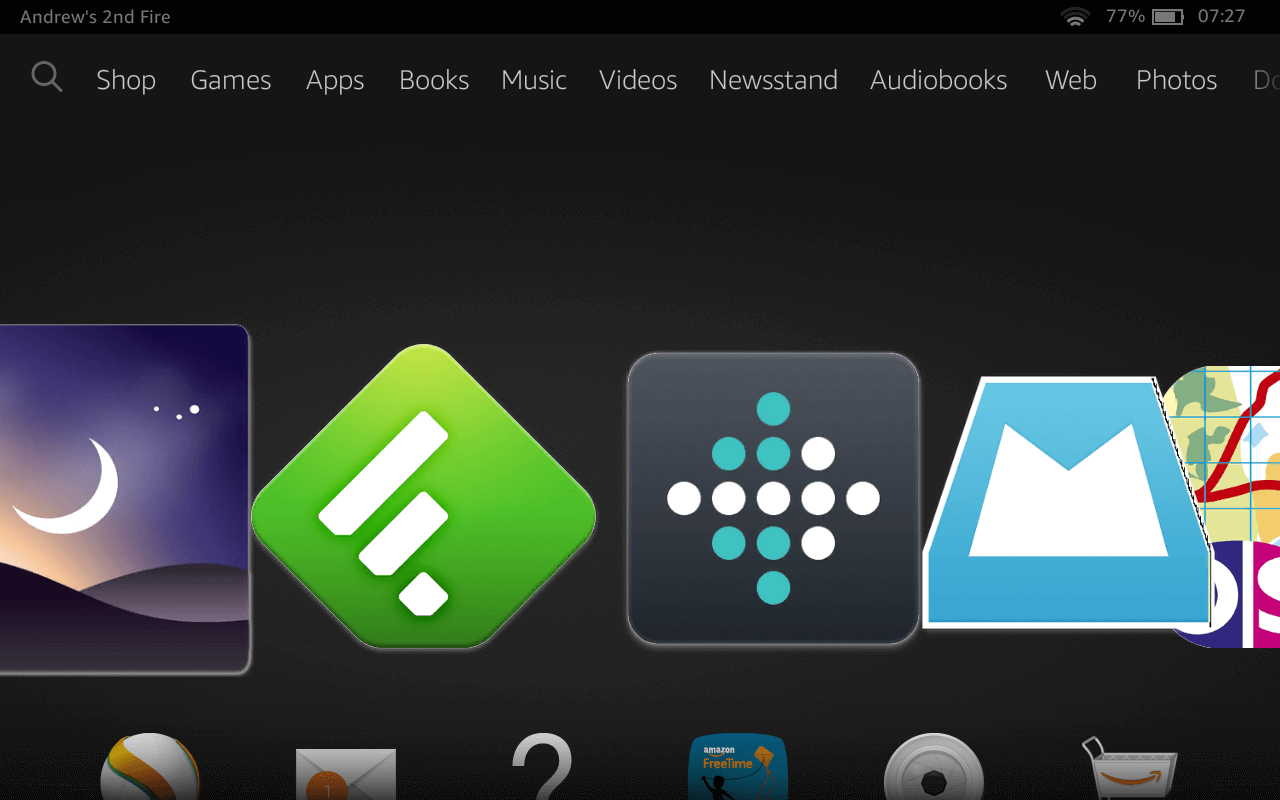 However, it’s still all about the apps though, and it’s good to see that the range of apps available in the Amazon Store has increased in the year since I reviewed the HDX. For example, Zinio is now available (though it didn’t want to load on the HD 7) and Mailbox has been released as well, so there’s a great email client too. For the average user, it’s hard to see app availability as an issue.

More than apps, Amazon is about content and as with all Amazon devices, the Fire delivers well. Signing into the Fire HD 7 with your Amazon credentials instantly accesses all your books, music and video content. It’s easy to switch between content that’s on the device and content that’s still in the cloud – there’s a simple toggle on the top right – so managing storage is less of an issue, even on 8 MB devices. Audio playback is good and background noise is minimal, even when listening with earbuds in quiet environments. The rear speakers are one of the highlights of the Fire HD 7, giving surprisingly good sound and add to the atmosphere when watching video. 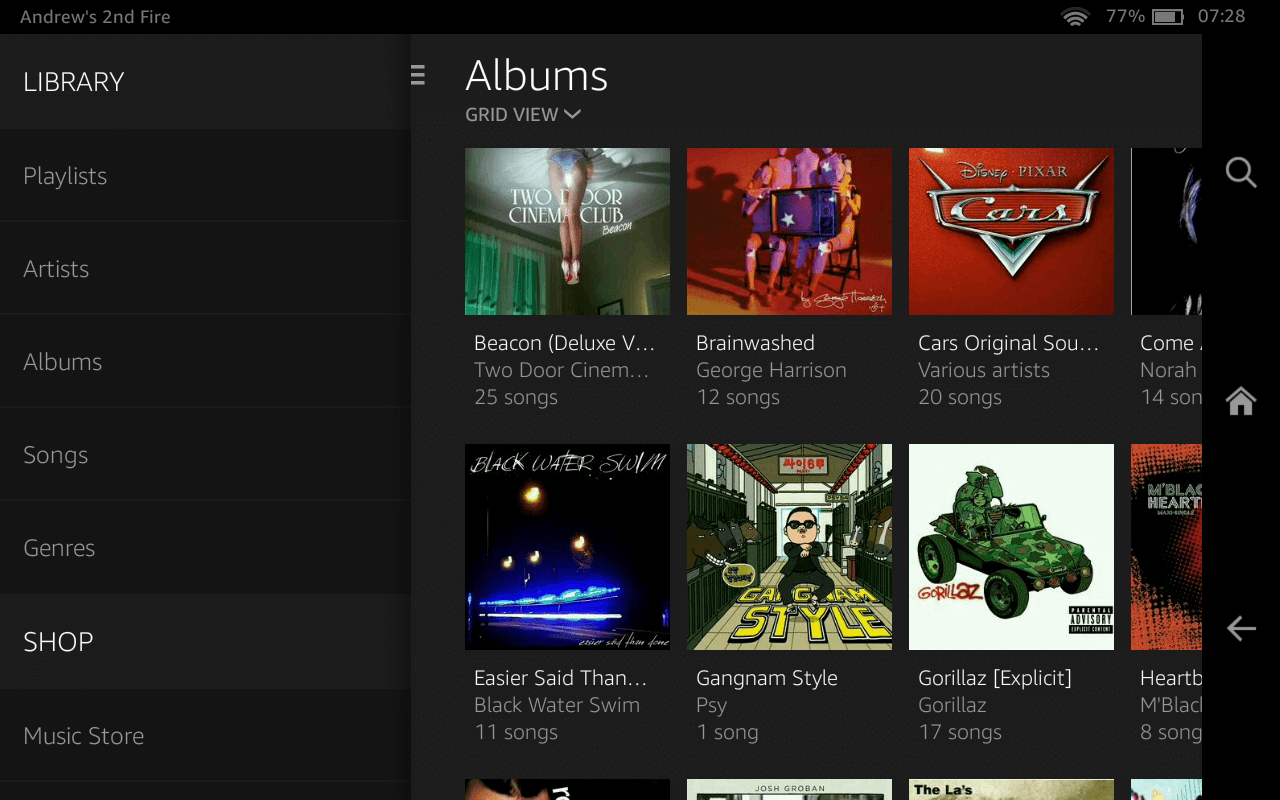 For films and TV on demand, Amazon offers its Instant Video – playback of movies is as smooth as you’d expect. I reviewed much of GNC’s CES coverage on the HD 7 and it handled all the video I threw at it. 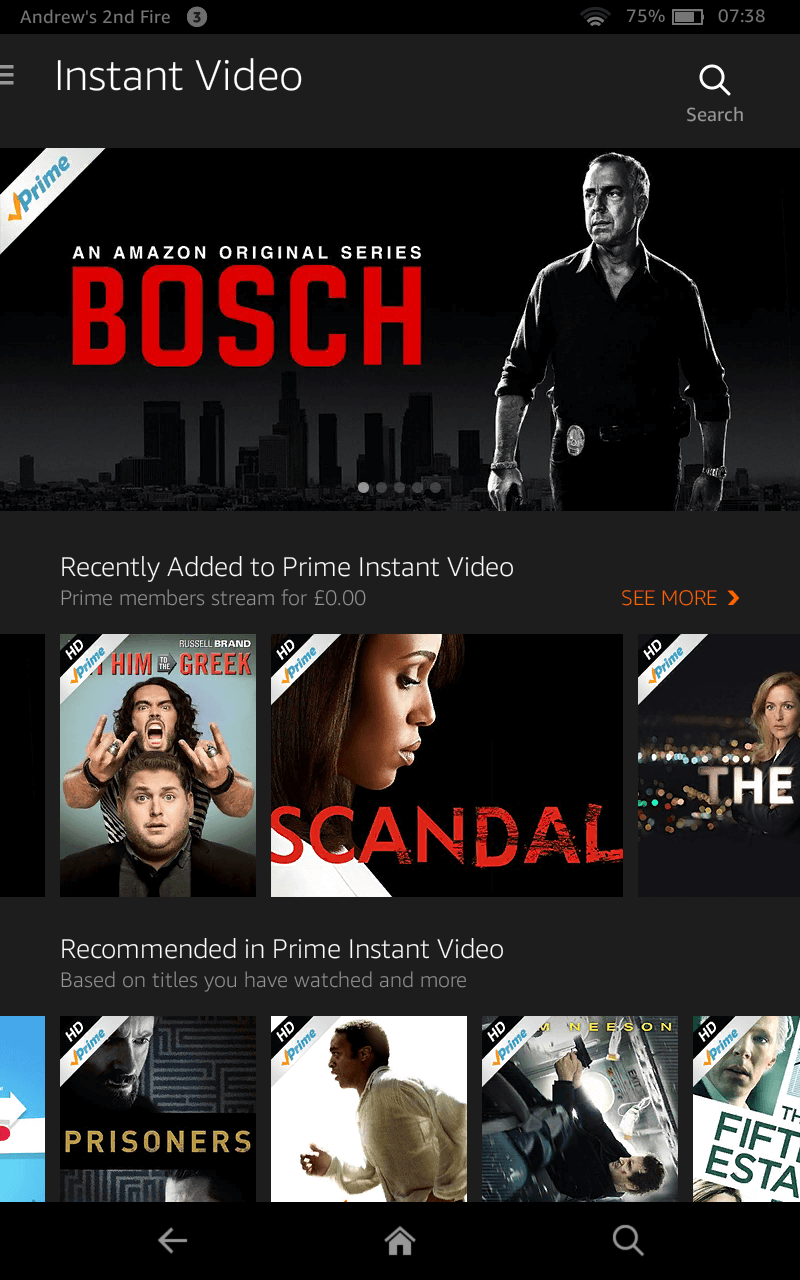 As with other Fire tablets, Amazon offers FreeTime, a parental controls app that lets Mum and Dad add apps and content to a child’s profile. Access to the web browser and social networking apps is restricted and the amount of play time can be controlled as well. It’s well done and increases the appeal of Amazon Fire tablets to families.

Turning to price, the base cost is GB £119 for the 8 GB wi-fi version with “Special Offers” aka adverts. Taking the memory to 16 GB ups the cost to £139. Removing the adverts costs an additional £10 in both configurations.

I’ve been using the Fire HD 7 for over a month now and I like it a great deal. It’s fun, robust, inexpensive and with the parental controls, makes a good choice for a family tablet. The screen might not have the highest resolution but if I hadn’t read the spec sheet, I wouldn’t know or care as it looks great. I enjoyed having the HD 7 around and there were plenty of times when I picked up the HD 7 in preference to my Nexus 9. If you are into the Amazon ecosystem, this would appear to be a no-brainer buy…….

Thanks to Amazon for the loan of the Fire HD 7 tablet.