The latest iteration of Motorola‘s Moto X has appeared on many end of year lists as the best of phone of 2014. Much as I dislike “best of” lists, I have to agree they’re probably right as the Moto X is an excellent phone. So much so, I’m tempted to simply say that the 2014 Moto X is “the 2013 Moto X – only better”. However, I guess I’d better be a little more rigorous. Let’s take a look. 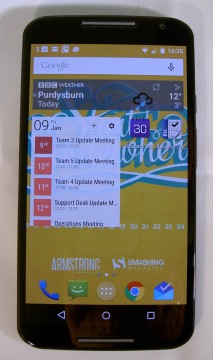 I’ve spent a little around a month with the Moto X courtesy of Motorola and as an upgrade from my previous workhorse, the LG Nexus 4, it’s a significant jump which is emphasised by the coincidental arrival of Android 5. The Moto X arrived with KitKat out of the box, but upgraded to Lollipop within minutes. 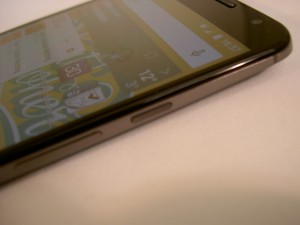 The Moto X looks good, and this particular phone is nearly all black with the on/off and volume rocker in a dark grey metal. There are speaker highlights at the top and bottom of the phone too. Using MotoMaker there’s wide range of colour combinations for both the metal frame and the back of the phone, which also comes in a few different materials including leather. Nice. 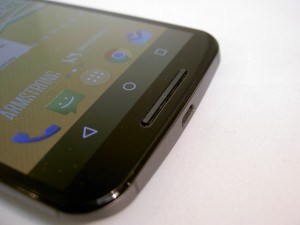 Moving round the phone, the right-hand side has the ribbed on/off button and similar volume rocker. There’s a micro-USB socket at the bottom and 3.5 mm audio jack at the top. I like the left-side clear so it’s easy to rest the phone on the edge and there’s no fiddling around for the volume controls. The back has the rear-facing camera with flash ring and there’s the signature dimple in the back which might have been a fingerprint scanner. Powering the phone up reveals two things….first the screen is even better than last time and second Motorola has still kept it near to stock Android. The full HD screen gives a high pixel density of 423 ppi and everything looks good. True to AMOLED displays, colours are strong and vibrant, though some people may find it oversaturated.

Returning to the user interface, anyone familiar with a Nexus device will be totally at home. It’s all fairly standard and what Motorola has done is to tweak some of the standard apps and include a few value-adding apps which you can use or not use, as you wish. They’re 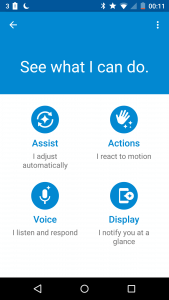 all pretty good and several have been updated with new names and extra functionality. Both Help and Migrate are much as before and Connect now supports newer devices such as the Moto 360 smartwatch or Keylink tracker.

Moto has replaced the earlier Assist as a personal assistant-type app that sets up rules for when the phone needs to be quiet, based on driving, meetings or sleeping. The new version adds extra features to set up rules for reacting to motion, responding to voice and displaying notifications on the screen. Active Display is still cool – go up to the phone and notifications will fade into view. It’s one of the best Moto features by far. The new Moto X now has Attentive Display too which keeps the screen on when the owner is looking at the phone but turns it off to save power when the owner looks away. Neat.

Camera-wise, some other reviewers gripe that the 13 megapixel camera lets the phone down. I’m not so sure: while it’s not a necessarily a great camera, my photos seemed to me to be an improvement on those taken by the previous generation of smartphone camera. I was able to zoom in further without loss of detail and colour reproduction was good. Frankly, if you want great photos, use a DSLR.

To round off the review, here are a couple of family photos with the 2014 Moto X next to the original and a Nexus 4 snuck in the middle. The new one is bigger but it’s not crazy big like the Nexus 6 or the OnePlus One. I think it’s a good size. 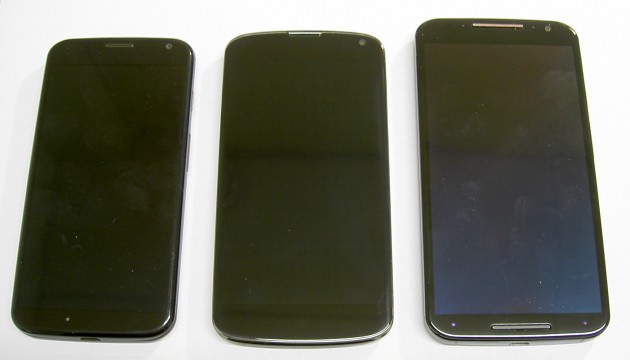 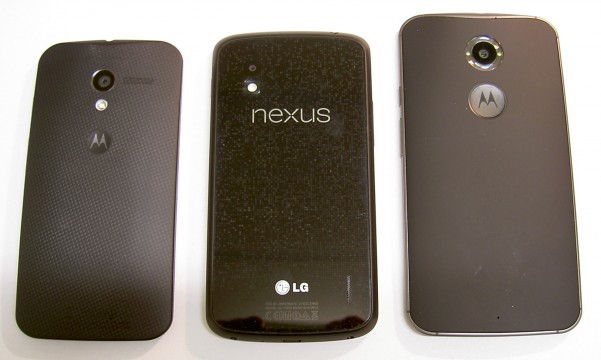 Reiterating, the Moto X is an excellent phone which is competitively priced, starting at £419 here in the UK, though there are occasional offers that drop the price by good chunk. It feels great in the hand, has a lovely screen and sticks to stock Android while adding value through apps rather than eye candy. I’m seriously considering buying one for myself to replace the ageing Nexus 4, so consider that a recommendation.

Thanks again to Motorola for providing the Moto X for review.