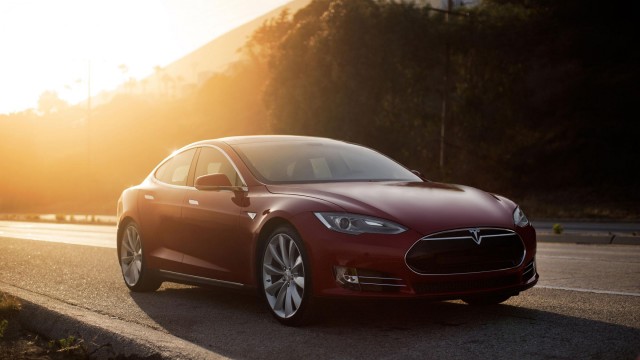 Imagine if the government had bailed out the horse-drawn carriage business in 1910. How much longer would it have been before the personal transportation industry advanced to the point that everyone could have an automobile? Perhaps the government shouldn’t have bailed out conventional gasoline-powered cars. Maybe it’s time to let the evolution of the automobile take another step forward. Telsa is leading the way for this new horizon and if you ever get a chance to drive one, you’ll quickly learn that you’ll never want to drive a gas vehicle again.

During a recent trip to San Francisco, I spent a day with some friends who were shopping for a new car. We went to dealer after dealer, studying prices and shapes and colors and of course gas mileage. We saw some pretty nice cars. And of course they wanted something affordable and reasonable, but not hideous or unsafe. At the end of the day they went home and I stopped at ONE more place – the Tesla dealership in Burlingame.  I asked to take a test drive and the friendly staff set me up in the Tesla Model S P85, which is the top of the three-car line-up in the Telsa fleet.

First of all, I’m not really a car guy. But that doesn’t matter. There were so many moments while driving this thing, where I found myself saying, “This is just so cool.”

The company is owned by Elon Musk, who also owns Space X, and this makes perfect sense when you climb aboard this space rocket of a car. As the salesman approached the car, it started automatically, sensing the key in his pocket. The door handles which were flush against the door, popped out and I couldn’t help but feel like they really wanted to make something efficient and powerful but, as I mentioned, really cool too.

The first thing I noticed when I sat down in the cockpit of this future car, was the massive 17” touch screen in the middle console. This is your control panel for music, navigation, internet, backup camera and phone.  No more dinking around with your tiny smart phone for that Pandora app, or Google map, this beast of a monitor makes access to these things extremely simple. One of the most important features the computer brings up, are all the Tesla Supercharger stations across the country and even the world. It shows how many are currently in existence but also how many are scheduled to be in place in the next year – which is considerably a lot more. Charging is free at any Tesla shop, and they’re currently spaced out appropriately across the US, so in theory, you could drive across the country for free. The car can also be charged at other non-Tesla chargers but a fee may be required.

After a quick lesson in where all the knobs and buttons were and a demo of the control panel screen, we were off. This car has power. Lots of power. A little acceleration goes a long way, and when you want to slow down (which ideally, you don’t) just letting up on the pedal slows the car down to a point where you may not even need to use the brake. This regenerative braking system is by design to save power. The amount the car slows down when not accelerating, can be adjusted via the control panel as per the driver’s preference.  The P85 is stocked with an 85 kWh battery giving it a range of 265 miles per charge. The 85 has the same battery while the base model 60 has a 60 kWh battery giving it a range of 208 miles per charge.

One of the next things I noticed was how smooth it was, but also how SILENT it was. Even when I was encouraged to give it a little more acceleration, there was no sound. The P85 can do 0-60mph in 4.2 seconds. I’m not sure I got it to that on the side roads but it made merging into traffic on the freeway, feel just fantastic. I was told the test car is limited to a mere 80 mph cap but if I had my own, I could get it to 130 mph. In Bay Area traffic, good luck getting anywhere at those speeds. But speaking of traffic – which tends to be a lot of stop and go – the Tesla will give your ankle a break from going back and forth on pedals, thanks to the regenerative braking.

During the drive we hit a rather bumpy road. I immediately noticed that this was no problem at all for the car, and this is due to its Smart Air Suspension. The system automatically adjusts and levels itself out as needed. This system can also be accessed through the control panel to raise or lower the rest of the vehicle if needed for an incline, snow driving or loading/unloading.

The tech of the Tesla S is state-of-the art. And the price tag reflects that. You’re looking at somewhere around $70k for this baby, but it IS a luxury vehicle. A very, very cool luxury vehicle. But if you feel like getting one, all you have to do is head over to teslamotors.com and build yourself a custom car. There is currently somewhere around a three-month wait on the S.

I found myself wanting to drive fast but was also conflicted as I didn’t want to be done with it too quickly either. After driving this car, I really felt like I was getting into a horse-drawn carriage when I finally had to return to my boring old gasoline car. Maybe it’s time to let those “analog” cars die and embrace the future of electric vehicles. If the future is Tesla, you’re going to love it.