The Contour+ weights only 5.3 oz and has a 170° wide angle lens. It delivers HD video up to 1080p at 25/30 fps or 720p at 50/60 fps. With the new Contour Connect App any iPhone and soon Android can be used to stop and start and recordings. Contours exclusive Bluetooth technology allows Contour Connect to turn the users cellphone into a wireless viewfinder, so the user can adjust shots in realtime. There are multiple mounts available allowing the camera to be attached to almost anything. What the Contour+ was missing was the ability to stream directly to the Internet. 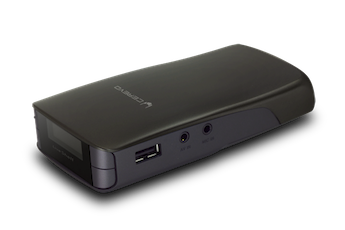 That is what Cerevo adds to the equation the Cerevo LiveShell. The Cerevo LiveShell attaches to the Contour+ by HDMI cable and then it can send out a live stream either by wired LAN or 802.11 b,g and n compatible wireless LAN. The Cerevo LiveShell can run for 2 hours on batteries. You can control the LiveShell thru a Web-based application on a smart phone or computer. The LiveShell has a maximum resolution of 480p. It is the first device that was given the “Ustream Compatible” seal of approval by Ustream. It does come with a power adapter allowing for 24/7 stable broadcasting. If you want to see an example, the Cerevo LiveShell is currently running in Akihabara, a section of Tokyo, Japan. The Cerevo LiveShell works not only with Contour products but a multiple number of video cameras, including cameras with analog inputs.

Contour began in 2003 when two University of Washington undergraduate students attempted unsuccessfully to film a ski run down a slope. The company now makes world-class hand-free video cameras, for the adventure and sport enthusiast in all of us. Cerevo is a Tokyo, Japan based company started in 2007 they specialize in live streaming. The Contour Connect is currently available in the iTunes store and should be coming to Android 2.2.1 and above in April. The app is free. The Cerevo LiveShell was launched in Japan in November 2011 and will be available through the Contour Web site starting February 1, 2012 for $299. The Contour+ is available now for $499.00. If you want to stream your adventures live to Ustream than you need to take a look at both the Contour+ and their new partner Cerevo LiveShell.